According to the project details, shelter homes were to be set up at five different locations in Lahore and Rs337.7 million were utilised for their establishment 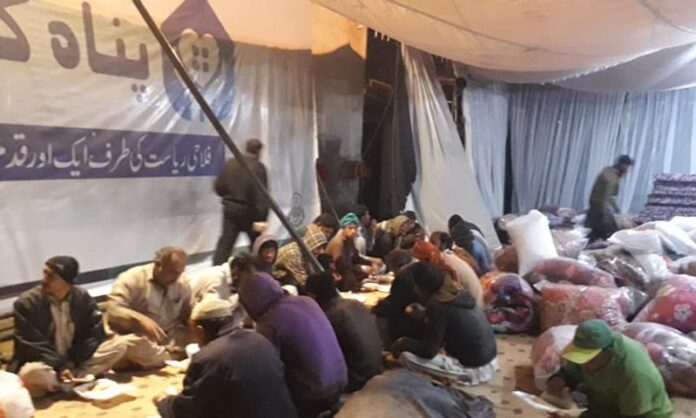 LAHORE: The shelter homes (panahgah) established in the provincial capital on the directives of Prime Minister Imran Khan for the poor, helpless and homeless have been revealed to be constructed using poor material, are marred by mismanagement and are presently in a dilapidated condition.

The project was executed by Lahore Development Authority (LDA), whereas the Social Welfare and Bait-ul-Mal department of Punjab was the sponsoring agency.

According to the project details, shelter homes were to be set up at five different locations in Lahore – Data Darbar Chowk, General Bus Stand Badami Bagh, Fruit and Vegetable Market Badami Bagh, Railway Station and Thokar Niaz Baig and Rs337.7 million were utilised for their establishment.

According to a report by a government department which has been issued over the project, some cracks were observed in the wall of the building of the Railway Station panahgah and the leakage from the ground floor roof slab was also observed there.

The report also stated that it was planned that 850 needy persons would be accomodated under the project (in all five centers) but as per the provided break down, the existing capacity of the panahgahs was found to be slightly over 660 in which 18.93 per cent beds were reserved for females and 81.7 per cent for males.

The report further revealed that the official timings for stay at panahgahs was 6:00 pm to 9:00 am while it was noticed that passengers were evacuated forcefully at 6:00 am in the morning.

Similarly, it was also planned that Punjab Auqaf department shall provide the food for panahgahs but dinner and breakfast were provided by civilians as charity and the menu of the dinner was rice, however, the quality of the food was found satisfactory.

The report added that the passengers highlighted parking issues for their vehicles as the concerned panahgahs did not allow them to park their vehicles inside the premises of the centres although a reasonable space was available for parking.

The report also revealed that only a single bed was being provided to a passenger and their child who was younger than 18 years, which made their stay difficult.

“As reported by the railway station staff, the quality of the potable water was not satisfactory which may cause various health issues for the passengers and the staff of the panahgahs. The mechanism for maintaining the history of the passengers was not framed by the department due to this the local peoples becoming habitual to stay at panahgahs,” the report said.

Moreover, the report identified that the registration process/system was not linked to the proper system, which hindered the law enforcement agencies’ (LEAs) ability to identify criminals/wanted persons.

The report recommended that medical screening desk should be established in panahgahs to screen the visitors for aliments and to curb spread of coronavirus.

Rural areas to be brought at par with developed counterparts: Firdous

LAHORE: Special Assistant to Punjab Chief Minister on Information and Broadcast Firdous Ashiq Awan on Monday said that the provincial budget would be in...
Read more
LAHORE

LAHORE: The International Music Against Child Labour award has been given to a rising singer from Pakistan, Faraz Ahmad, for his outstanding work. The announcement...
Read more
LAHORE

LAHORE: A sub-inspector of Punjab police was abducted by unidentified men in Lahore late on Wednesday midnight. The men who reports said came on two...
Read more
LAHORE

LAHORE: The Lahore High Court on Tuesday served notices on the federal government and other nominees on a petition against skyrocketing prices of vehicles. Justice...
Read more
- Advertisment -