The military's media wing said that a group of mountaineers who were part of international winter K2 expedition visited GHQ in Rawalpindi and called on General Qamar. 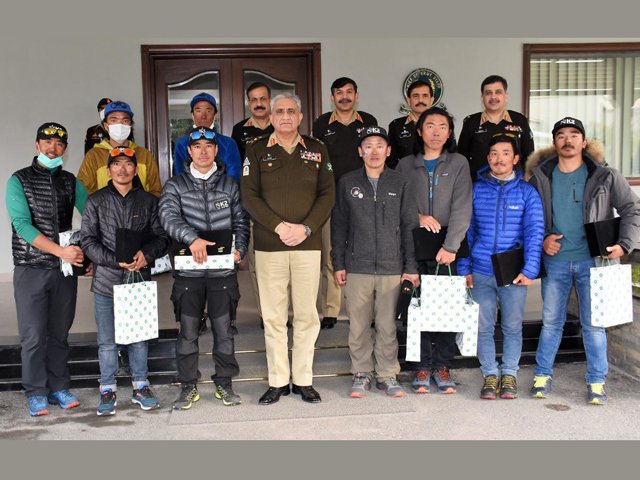 Chief of Army Staff (COAS) General Qamar Javed Bajwa on Friday congratulated the team of Nepalese mountaineers for making history by reaching the summit of Pakistan’s K2, the world’s second-highest mountain, in winter, a statement issued by the Inter-Services Public Relations (ISPR) said.

The military’s media wing said that a group of mountaineers who were part of international winter K2 expedition visited GHQ in Rawalpindi and called on General Qamar.

The COAS congratulated the climbers for their great achievement, scaling K-2 in winter for the first time; making history in the field of mountaineering.

The delegation on the occasion shared their experiences during the momentous expedition and thanked Pakistan and its people for their warm hospitality.

According to ISPR, the delegation also expressed their gratitude for facilitating the expedition to achieve the record.

Located on Pakistan’s side of Karakoram range, K2 is one of the world’s 14 tallest mountains – all higher than 8,000 meters – and is known as the world’s most dangerous and challenging peak.

Until the record was broken last week, the 8,611m peak was the only 8,000m peak that has never been climbed in winter.

Since the maiden attempt in 1987-1988, just a handful of winter expeditions have been attempted on the storied 8,611-metre (28,250-feet) mountain in the Karakoram range along the Chinese border.