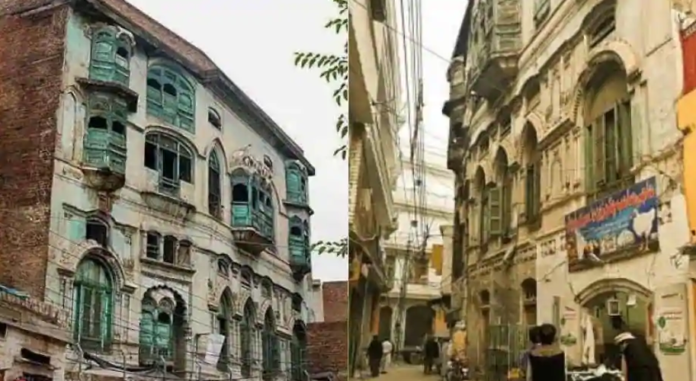 The provincial government has formally announced to convert the ancestral residences of Bollywood legends into museums and fixed their market values on the recommendations of Peshawar deputy commissioner (DC) and the Communication and Works Department (C&W).

In this regard, KP Chief Minister (CM) Mehmood Khan has formally approved the proposal, allowing the authorities concerned to purchase the ancestral houses at the determined rate.
According to documents, the total value of Dilip Kumar’s house has been fixed at Rs8.56 million while the value of Raj Kapoor’s ancestor residence has been set at Rs15 million. However, the current owner of Kapoor’s ancestral has demanded Rs2 billion for the ‘antique building’.
Earlier, the Archaeological Department had forwarded the case to secretary KP Culture for funding to purchase.

The dilapidated house of Mohammed Yusuf Khan, known professionally as Dilip Kumar, is located in Mohallah Khudadad of the historical Qissa Khawani Bazaar in Peshawar. In the past, the area used to be a residential area but it is a major business centre at present.

Dilip Kumar was born in the house on December 11, 1922; however, his family moved to Bombay. In 2013, Kumar’s house was declared a national heritage site by the federal government that vowed to convert it into a museum, however, its owner took the matter to the high court.

Earlier in 1988, Dilip Kumar had visited his ancestral home. At that time, he had kissed the doorstep of his house and reminisced about his childhood in the house to the media.

On this occasion, he wished to visit to his ancestral home in Peshawar again, but it was not possible due to the overwhelming crowd that had gathered there to greet him.
The ancestral home of Bollywood legend Raj Kapoor is located in Mohallah Dhaki Munawar Shah of Peshawar city. A generation of the Kapoor family, that gave many superstars to Bollywood, was born in this mansion. It was built between 1918 and 1922 by Raj Kapoor’s father.
The Kapoor mansion was in good condition, however, earthquakes and its owner have damaged the building beyond repair. Locals now fear that the house could collapse at any moment unless authorities step in.
Facebook
Twitter
Linkedin
WhatsApp
Email
Previous articlePRA registers 41.6pc growth in H1FY21
Next articlePolitical appointments