The CoD was countered by a ‘third force’ 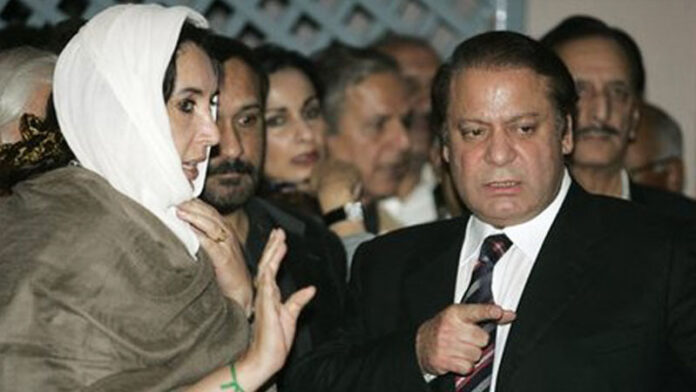 Politics has seen enough vicissitudes. Perhaps, the storm is over. In the military term, the command is, “JasayThay!” (As you were). Back to the last posture. It is assumed, back to normal.

The storm that devastated politics, economy and society had been unleashed in the name of “change.” Behind visible faces, actors were different. Even masquerading remained the order of the day. Sons of military generals and dictators claimed attention. They enjoyed prompt access to the military leadership.

The show was akin to puppeteering. In South Punjab, some politicians received slaps in the face for not coming to terms with the puppeteer in the run-up to the 2018 elections. In fact, democracy received those slaps. Democracy got deformed and disrespected. Nobody had thought that military generals would stoop so low as to order a slap for a politician who was not submitting to the dictate of authoritarianism. The will of the people died. Democracy perished on that day. Subsequently, there was an era of fascism.

Apparently, calm has visited after the storm. In itself, the calm is unsettling just because it is unprecedented. It exudes uncertainty of its own kind. Will politicians be able to live with the calm? It is yet to be seen

It must be the Charter of Democracy (CoD) signed between Nawaz Sharif of The PML(N) and the late Benazir Bhutto of the PPP on 14 May 2006 in London that had annoyed many.Both signatories were in exile. The CoD told the world what was happening in Pakistan.

The CoD oozed the message of exclusion for the powers-tha- be. The CoD intended to herald a new era of political reconciliation, which could be a nail in the coffin of military dictatorship. Consequently, the CoD was reviled.

A distinguishing feature of military dictatorship in Pakistan is that it cannot survive without foreign help. There should a foreign master to offer an umbrella of some ruse. The most favoured wile used is the client status. That is, Pakistan dons the attire of a client state to deny democracy to its people. The imposers forget that neither the military nor the mullah (clergy) founded the country. Instead, both were beneficiaries of the struggle and sacrifice of people.

The West, the champion of democracy, tends to turn a blind eye to the plight of the Pakistanis, who miss democracy for a decade in each dictatorial spell. The exoneration of the West lies in the excuse that it did not impose dictatorship on Pakistan. Nevertheless, the West has to share the blame of connivance with the military dictators, who keep Pakistanis democratically inexperienced and hence immature. Even today, most people have no idea about their democratic constitutional rights. The higher judiciary is manipulated to deny people stipulated freedom.

While in exile, the late Benazir Bhutto lobbied in the USA to make think tanks realize that the US policies in Pakistan were more supportive of military dictatorship than civilian sovereignty. She addressed seminars and wrote articles in newspapers to make the Americans appreciate duality in the US foreign policy towards Pakistan. She used to assert that the civilian democratic government could also do what the military dictatorship was happily delivering to the US interests. Perhaps, this line made her the prime target of assassination.

Anyway, somewhere in Pakistan, the antithesis to the CoDwas born to frustrate the project, political resolution. In the unity of two mainstream political parties lay the exclusion of military dictatorship. The tug-of-war for monopoly over power ensued. One of the reasons was that the continual spells of military dictatorships had made the military generals stakeholders in politics. Military dictatorships were the source of wielding power and amassing wealth. The porous western border had been the source of smuggling of all sorts, enough to fill bank accounts with undeclared illegal wealth. until now, when tax documentation is necessary. The civilians had neither courage nor chance to question the accretion of fortunes.

Political reconciliation is tantamount to the consolidation of politics, bracing for unity. Benazir Bhutto could not survive to see the ratification of the CoD. The idea of having a third political force, if not party, must have originated post-CoD. Over the years, the inchoate idea got ripe and saw the light of day almost eight years afterwards in the form of sit-ins. Staging agitation to disrupt the tenor of democracy was the beginning. The same is still the norm.

The factor unjustified with the effort of antithesis to the CoD was the formula, “We are in a state of war,” meaning thereby that everything was permissible in this war. The doers remained true to their words. They did not hesitate to use the ethnic, and even the religious, cards.The people of South Punjab were duped into believing that their ethnic identification would be appreciated nationally through carving out a new province. The dream was unrealistic but it was sold. The dream would go down the lane of history with acrimony festering in the minds of the youth inhabiting South Punjab. The doers also used the religious card to defeat politicians espousing democracy. Rebellion was infused in the youth, who consider it now an instrument of expression.

By using these cards, the doers played with the future of Pakistan. Such offences are unpardonable, as they misguided the youth and polluted their minds to achieve a myopic objective– to introduce a third force to challenge the two mainstream political parties, which had ensconced themselves comfortably in the national political arena.

Apparently, calm has visited after the storm. In itself, the calm is unsettling just because it is unprecedented. It exudes uncertainty of its own kind. Will politicians be able to live with the calm? It is yet to be seen.