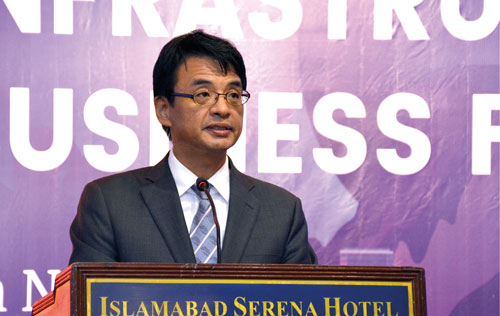 ISLAMABAD: Ambassador of Republic of Korea Mr Suh Sangpyo has said that South Korean investors were intending to investing US$10 million in solar energy generation projects in Pakistan, which would add to the local energy generation capacity and fulfil the domestic power requirements.

Addressing the participants of ‘Pak-ROK 2022 Infrastructure Business Forum’ here, Ambassador Suh Sangpyo said that it was the second edition of the forum and many companies operating in Pakistan wanted to further intensify the cooperation as many companies were keen to invest in solar energy sector projects in Pakistan.

He said that investment process was effected due recent floods as crops standing over large areas destroyed and communication network was effected badly. Korea will also provide assistance for the rehabilitation of flood effected people in the country, he asserted.

Minister for Planning Development and Special Initiatives Ahsan Iqbal called upon the Korean investors to explore the vast investment opportunities existing in various sectors of economy to enhance bilateral trade and investment relations between the two countries.

Addressing the forum, the minister said that bilateral trade volume among both the countries was quite low and stressed the need to enhance it to its existing potential in order to further strengthen economic relations in future.

He said that Pakistan had deep relationship with Korea as both the countries were enjoying cordial trade and economic ties, adding that the forum would help in further cementing these existing bonds. He said that the construction of Lahore-Islamabad Motorway was a flagship project and shining example of bilateral cooperation between the two countries.

The minister said that 2022 century was the century of trade and economics, adding that Koran companies must harness all these existing investment opportunities in different sectors of national economy, besides taking measures for the technology transfer.

He asked the Korean companies for initiating joint ventures and developing projects on public-private partnership in various local sectors of national economy including energy generation, education, healthcare and other sectors.

Ahsan Iqbal said that a majority of local population was consisting on young people and leading Koran technologies companies were invited to establish their research laboratories here to get the dividend from this as cost of labor in Pakistan was lower as compared the other countries. Besides other sectors, the minister said that tourism was another sector which was offering grand opportunities for Korean investors, particularly in Taxila as the city was origin of Buddhist civilization and Gandhara civilisation.

He urged the need for establishing a university in Taxila jointly by both the governments in order to preserve the history and oldest civilization as well as educating the coming generations about the that old civilization.

Speaking on the occasion, Minister for Board of Investment Chaudhry Salik Hussain said that road infrastructure in the country was damaged due to recent floods and reconstruction of these roads offers special opportunities for Korean investors and companies.

He said that local logistic sector and port and shipping was other sectors which offer tremendous investment opportunities, adding that wind and solar energy generation were also open for investment in order to produce renewable energy.

He informed the forum that the government was taking steps for ease of doing business and introduced investment friendly policies, besides providing all possible support for local as well as foreign investors for investing in all sectors of national economy.

Addressing the forum, Minister for Energy Engineer Khurram Dastgir Khan said that Lahore-Islamabad Motorway was the first project that was started by a Korean company which was bright example of joint venture, adding that due to technology transfer, other motorways were also constructed, which were providing facilities and connecting among different cities.

He said that a solar energy research laboratory was being establishing with collaboration of Korea, adding that it would be another milestone to develop and promote solar energy projects to produce cheap energy and fulfil the local energy requirements.

He said that government had launched solar initiatives and laying foundation for energy transaction from fossil fuel to renewable energy and called upon the Korean investors to invest in renewable energy projects.

The representatives of the South Korean companies working over power plants in Pakistan have vowed to work extensively to help Pakistan meet its energy needs. They also shared the difficulties they were facing in execution of the projects in Pakistan.