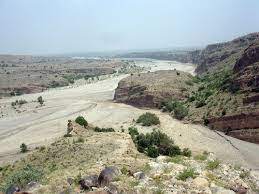 LAHORE: Hill torrents originated from Suleman Mountain Range following recent heavy spell of monsoon rains were the ferocious most during last four decades affecting over 100,000 people besides damaging nearly 4000 homes and over 200,000 acre crop area in Dera Ghazi Khan and Rajanpur, the two districts sandwitched between hill torrents from mountains in the west and river Indus in the east.

Though water from Indus River did not touch the alarming levels as it did in 2010 floods, the hill torrents from Suleman Mountains Range did the most damage in 2022, leaving behind a trail of tragedy of homelessness and material losses like livestock, crops, valuables kept safe in homes.

The floodwater swept away full or parts of many mud houses, cattle, and crops besides damaging transportation and communication infrastructure.

However, departments concerned were quick to reach out to the affected people. Rescue 1122 officials, officials from other departments of south Punjab, locals, and volunteers remained engaged in rescuing people trapped in flooded areas.

Relief and rescue operations generated some soul-enriching stories; one linked to the honesty of a Rescue 1122 official, who found a wooden box floating in Mangrotha, Taunsa Sharif, and returned it to the actual owner knowing very well that it contained gold ornaments valuing Rs 5 million as dowry of the daughters of a retired teacher Ghulam Rasool Tipu.

According to revenue officials and reports of flood control centres in the two districts, the floods submerged 186 Mauzas affecting 112,259 people, and damaged 3,957 houses, and 207,372 acre crop area.

The same report, based on initial assessments, had already been sent to Chief Minister Chaudhry Pervaiz Elahi, triggering various initiatives, including compensatory amount of Rs 800,000 for heirs of each of 23 persons died in floods, declaring emergency in the two districts and intensifying rescue operations.

Due to ongoing relief operations and rehabilitation, normal life had just started to restore in DG Khan and Rajanpur.

Officials said that, contrary to past observations when only a few hill torrents would flow full, excessive monsoon rains over Suleman Mountain Ranges triggered water flow through 13 hill torrents in DG Khan and Rajanpur districts that played havoc with the life and property.

Officials said that federal and provincial governments believe that hill torrents could be controlled and used as source of water for agriculture and construction of channels that could be beneficial for the people of two districts. There were plans which would be executed soon to harness this source of water, they added.

-- Observers fear way being paved to install convicted, disqualified Nawaz as PM ISLAMABAD: Article 62 (1)(f) of the Constitution, which sets the precondition for...
Read more
NATIONAL

ISLAMABAD: The Higher Education Commission (HEC) has announced October 18 as the last date to apply for the United Kingdom scholarships under Commonwealth Scholarships...
Read more
NATIONAL

UNITED NATIONS: Pakistan has termed India's "brutal" oppression of the people of occupied Kashmir the "worst example" of state-sponsored terrorism which it noted the...
Read more
- Advertisment -

October 4, 2022
ISLAMABAD: The Higher Education Commission (HEC) has announced October 18 as the last date to apply for the United Kingdom scholarships under Commonwealth Scholarships...

WHO concerned about rising Cholera cases in flood-hit cities