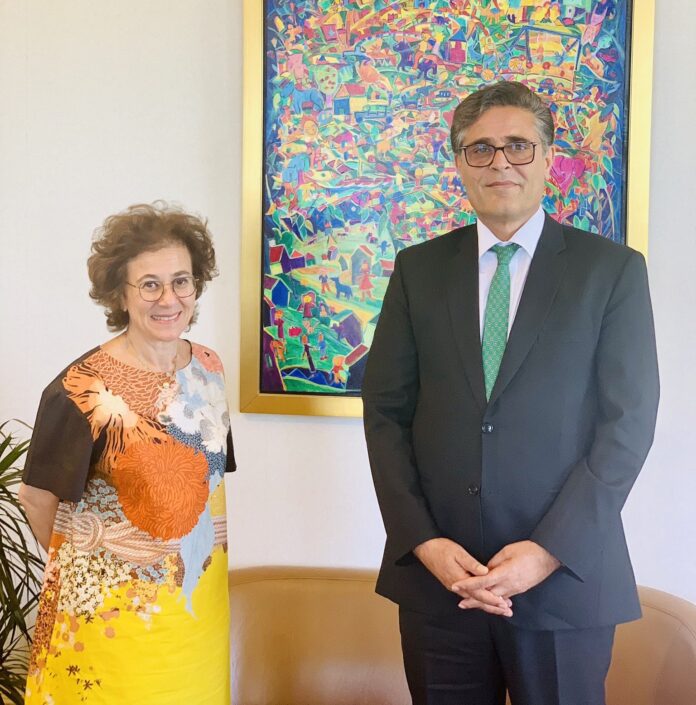 ANKARA: Political considerations and bilateral economic interests continue to trump the pursuit of universal respect for human rights, dignity, and freedom of everyone everywhere, said a top Pakistan diplomat posted at the UN office in Geneva.

He said there is also a diversity of approaches to the promotion of human rights whereby “civil and political rights are often prioritized over social and economic rights.”

In an exclusive interview with Anadolu Agency, Khalil Hashmi, Ambassador and Permanent Representative of Pakistan to the UN in Geneva, explained the significance of the UN Human Rights Council (UNHRC), the issues of Palestine and Kashmir, and the role of the Organisation of Islamic Cooperation (OIC).

While the UNHRC is a global custodian of human rights norms and principles, Hashmi said: “the devastating socio-economic impacts of the Covid-19 pandemic have brought a degree of attention, but clearly, there is a long way to go to ensure that all human rights, freedoms and needs are accorded equal attention.”

Hashmi said the Pakistani mission at the UNHRC is the OIC Coordinator in Geneva.

“In this capacity, we consult, deliberate, develop common positions and coordinate our actions on a range of human rights and humanitarian issues,” he said.

The designated diplomats share the OIC’s perspective through statements and participation in deliberations and negotiations on draft proposals where “we project the OIC’s views and priorities on the worrying situation in the occupied Palestinian territory, Jammu and Kashmir, and (concerning) Rohingya Muslims, among others,” he said.

“We utilize the UNHRC platform to raise global awareness about human rights impacts of the global surge in Islamophobia and anti-Muslim hatred,” said the top Pakistani diplomat.

Earlier this year, the UN adopted a resolution proposed by the OIC and Pakistan to designate March 15 as the International Day to Combat Islamophobia.

On the Rohingya case at the International Court of Justice (ICJ), Hashmi said the OIC “fully stands by Gambia’s efforts to bring justice to the Rohingya Muslims.”

“The OIC has established an ad-hoc ministerial committee in support of these legal efforts. We hope the ICJ’s verdict advances the cause of justice, accountability, and remedy for the Rohingya people,” he added.

The ICJ is hearing a case filed by the West African nation against Myanmar over its alleged genocide of the Rohingya, described by the UN as “the most persecuted minority in the world.”

Pointing to the third anniversary of India’s “illegal and unilateral actions in occupied Jammu and Kashmir,” the Pakistani diplomat said the August 5, 2019 move by New Delhi has “three primary objectives.”

“First is to change the demographic structure of the occupied territory by transforming the indigenous Kashmiri population into a minority,” said Hashmi.

“Second is to alter the internationally recognized status of Jammu and Kashmir as a disputed territory, and third is to disenfranchise the Kashmiri people from exercising their inalienable right to self-determination, granted to them by several UN Security Council resolutions.”

Kashmir has been divided between India and Pakistan since their independence in 1947 but is claimed by both in its entirety. The South Asian nuclear-armed nations have been to war three times over the disputed region.

“The observance of this day is aimed at drawing global attention to Indian defiance of international law. The purpose is also to shine a light on the grave impact of these unlawful actions on the exercise of the Kashmiri people’s basic civil, political, economic, social, and cultural rights,” he said.

He warned that the present state of human rights “in the region is very grave.”

“Considering that India has failed to uphold the rights and freedoms of the Kashmiri people and blocked any independent scrutiny of or access to external observers, this situation, therefore, meets any objective criteria for preventive actions,” he said, citing a warning issued by Genocide Watch — a US-based global monitor on conflicts.

To address the “crisis situation” in Kashmir, Hashmi said the UN High Commissioner for Human Rights can “exercise her prevention mandate, for example, to publish an updated Kashmir Report.”

The UN High Commissioner has published two Kashmir reports, in 2018 and 2019.

“Since the human rights situation has deteriorated substantially since the publication of the last OHCHR report in July 2019, there is merit in producing an updated report,” he emphasized.

Referring to the UN Security Council resolutions on Kashmir, Hashmi said it is clearly stipulated in Article 25 of the UN Charter, which obliges all UN member states to accept and carry out the Security Council’s decisions.

“These resolutions are part of the compendium of international law. These resolutions clearly provide that the final disposition of the State of Jammu and Kashmir is to be determined through a UN-supervised plebiscite,” he said.

“These resolutions are also clear, i.e. the UN Security Council has unequivocally reaffirmed the Kashmiri people’s inalienable right to self-determination,” he said.

Hashmi said the primary obstacle in the implementation of the UN resolutions on Kashmir “is India’s persistent defiance and non-compliance with these resolutions, which is reinforced by the silence of some countries due to the prioritization of interests over principles.”

In the case of Palestine, Ambassador Hashmi said the OIC countries and indeed countries from other regions as well as civil society organisations “have been consistent in calling out Israel’s grave violations of international human rights and humanitarian laws.”

He said the UNHRC has adopted several resolutions, held special emergency sessions, and established several mechanisms such as the Commission of Inquiry to investigate and document Israel’s human rights abuses.

The human rights case of the Palestinian people from the international law and multilaterally mandated mechanisms is clear, he said, adding “unfortunately, as in the case of the Indian occupation and suppression of the Kashmiris, powerful states continue to shield Israel from global scrutiny and accountability.”

“We urge countries to review their position and policies, uphold the universally agreed norms and principles across the board, and ensure consistent application of international law and principles,” Hashmi said.

“This remains a work in progress as far as deterrence is concerned, and if history is any guide, every tyranny has an expiry date.”