Vaping is as harmful as smoking, not a substitute 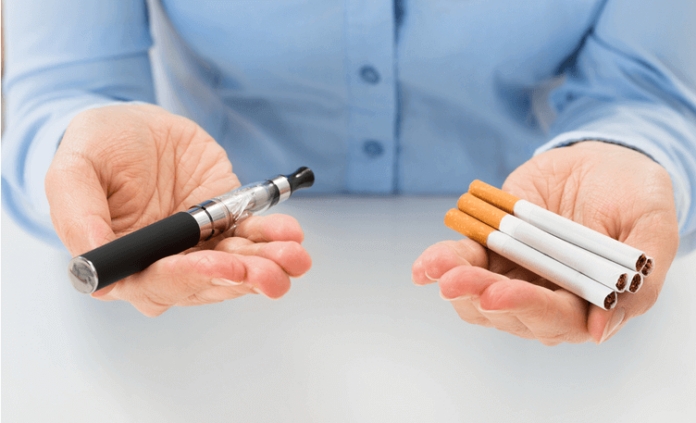 There was a time when tobacco or smoking was not considered good for health at all; these were rare but with passage of time things keep on changing. Different forms of smoking keep appearing and youngsters also get affected with all these. Chewing tobacco and smoking cigarettes were the pioneers of those. Cigars are a luxury of the elite. Cuban cigars are famous and got made famous by Fidel Castro. Sheesha was also an injurious and notorious thing.

Now, in modern times e-cigarettes are literally replacing the actual and injurious cigarette smoking. The reason or lame excuse associated with e-cigarettes is, these have less quantity of nicotine or are tar free; though it is affecting human lives badly,  obviously and ultimately.

The good thing is that the government is in favour of regulation and banning e-cigarettes and vaping. The real problem is its easy access and availability which is popularising it day by day. Most health experts also warn about vaping. Confirmed figures are still unavailable. Research is underway on bad and harmful effects of e-cigarettes, and this discussion might be continued. But one thing is clear that vaping is not good for health at all

Undoubtedly, addiction of any sort is a curse and bane. The increasing trend of vaping in Pakistani youngsters is leading to addiction. The clouds of smoking can be seen during vaping around them although these smoke clouds are not formed by cigarette-smoking, but why is it getting popular?

When youngsters newly enter college, they adopt smoking as a fashion or style statement or to prove their worth among other youngsters and colleagues. According to figures, there are approximately 24 million smokers in Pakistan. Now, e-cigarettes are getting more popular day by day, especially among youngsters.

Albeit it is also not problem free. Additionally, vaping is injurious to health. Although not enough research has been done about it, that does not make it safe or harmless. The people who are vaping, say that people are attracted towards it because its smoke is better compared to cigarettes, but the cloud of vaping is thoroughly harmful for human lungs because of the nicotine in it. Vaping includes vVegetable glycerin which is used in vegetable oils and propylene glycol which is used in drugs and foods for flavour and he third thing is nicotine.

Vapers find them easily digestible and not too harmful but in reality the things are totally deleterious.  Moreover, those who vape say that it too has harmful impacts but it is not as harmful as cigarettes because by smoking cigarettes, with just two drags you can harm your lungs more than by vaping. Although this logic is out of this world.

So, what differentiates vaping from cigarette smoking? Experts say that you can get rid of cigarette smoking by vaping, but it also has its own problems. If liberty is taken, it can be said that vaping can be a blessing in disguise for quitting cigarettes.

There are approximately 41 million people vaping globally and it is considered an alternative to cigarette smoking. But questions are being raised about  vaping. How safe is it?  What is behind a vaping illness outbreak in the USA? Its ban or limited use in public spaces are now also under discussion.

E-cigarettes look like normal cigarettes but they have different colours and flavours. Cigarette smoke has about 7000 different and harmful chemicals which can be cause cancer, heart attack and stroke. Detailed data about vaping is limited for the time being, but experts do acknowledge that it has less harmful chemicals than cigarettes. The basic reason for less harmfulness is the absence of tar and carbon monoxide in e-cigarettes but it is also true that there is very little information available about chemicals present in e-cigarettes.

Nevertheless, experts also opine that inhaling a chemical by heating it, is not good for health. Vaping can also create problems for human health and it is easier to consume vaping than cigarette smoking and may be due to it, it is getting more popular not only in young men but in women also. Vape does not get noticed as much as cigarette smoking.

According to girls, they still can’t vape at home. Others’ stares sometimes make

them uncomfortable. Even some girls say that they have quit smoking cigarettes and vaping has helped them. They even vape before their parents. According to recent surveys, the trend of vaping in teenage girls and boys is increasing rampantly and experts explain different reasons for it.

Different researches indicate that mostly the age group between 12-17 is attracted towards vaping due to a kind of peer pressure which will establish them before their friends as a worthy person. Firstly, they vape. Secondly, they consider vaping experimental and thirdly, they start vaping for mental satisfaction which is temporary and when the nicotine starts to decrease in the body, its worse effects start to appear.
Vaping is a new phenomenon in Pakistan and its health effects are also unknown, so that’s why it is also not rightly regulated in Pakistan. At present, vaping is prohibited in more than 40 different countries of the world or these countries have restricted its use, sale or import. But there is no ban or any specific law regarding vaping in Pakistan. In India, opposite to cigarettes, vaping is legal but sale of e-cigarettes is illegal. However, cigarettes are freely available. In Britain, the regulations regarding Vaping are most clear of all and they have even determined the quantity of nicotine and size of the container for vaping. In America, the regulations for vaping made by different states and even cities. At some places vaping is wholly banned but at some other places some flavours are restricted or online sale is restricted.

Rightly or wrongly, vaping is considered less harmful than cigarettes. Thus, some people incline towards vaping to quit cigarette smoking. Some smokers say that by vaping, they get rid of the bad smell from cigarettes, and nicotine quantity can be lowered according to desire.

Chain smokers by using it initially, can give up cigarettes. They further find Vaping convenient and can vape at any place in the office or home. They found vaping discreet, although they are aware of its harmful health effects.

As a health professional, I opine that the main ingredient is nicotine and both vaping and cigarettes have it. Nicotine is actually the main source of addiction whether a child, young boy or an adult uses it, and the addiction remains the same as normal cigarette smoking. Nicotine is a very powerful addictive substance especially for the young generation. If a teenager is vaping, the long-term effects are very harmful without any doubt. There must be a strong policy against Vaping and it must be banned as should be cigarettes.

The good thing is that the government is in favour of regulation and banning e-cigarettes and vaping. The real problem is its easy access and availability which is popularising it day by day. Most health experts also warn about vaping. Confirmed figures are still unavailable. Research is underway on bad and harmful effects of e-cigarettes, and this discussion might be continued. But one thing is clear that vaping is not good for health at all.

Twitter, a sanctuary of all types of political handles, is flooded with obituaries of what people say is the hybrid system of governing Pakistan....
Read more
- Advertisment -