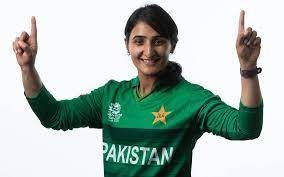 Pakistan batter Bismah Maroof was appointed as the captain of the Pakistan cricket team for the ICC Women’s Cricket World Cup on Monday, as the selection committee announced the tournament squad.

The announcement from the Pakistan Cricket Board (PCB) noted that this would mark her return to international cricket after two years as she took a break for the birth of her first child in December 2020. Maroof had confirmed her availability last month and was already being reintegrated into cricketing activities as well as resuming fitness sessions.

“It is a great honour for me to lead my country into another World Cup. I am thrilled to be back in action and do what I love and have dedicated my life to,” the PCB statement quoted her as saying.

She went on to add that “the aim is to reach the World Cup semi-finals and I believe this team has the potential to pull it off.”

She further stated that recent selection matches had proved “fruitful” for her and the whole side as they got some match practice under a “competitive and challenging environment”.

Meanwhile, experienced Nida Dar will be Maroof’s vice-captain for the World Cup.

The PCB said Ghulam Fatima and Nahida Khan were also called up while batter Iram Javed, all-rounder Tuba Hassan and wicketkeeper Najiha Alvi were named as the travellng reserves. Kainat Imtiaz and Sadia Iqbal, who were part of the ICC Women’s Cricket World Cup Qualifier squad, missed out on selections because of injuries, the statement added.

“I want to congratulate every player who made it to the squad for the ICC Women’s Cricket World Cup. We considered the conditions and challenges our team will encounter in New Zealand along with the current form of players and the team’s balance while putting together this squad,” the statement quoted Asmavia Iqbal, chair of the women’s national selection committee, as saying.

It is pertinent to note that the Pakistan squad will begin the final phase of their preparations with a 10-day pre-departure camp in Karachi from January 27. They will depart for New Zealand on February 8.