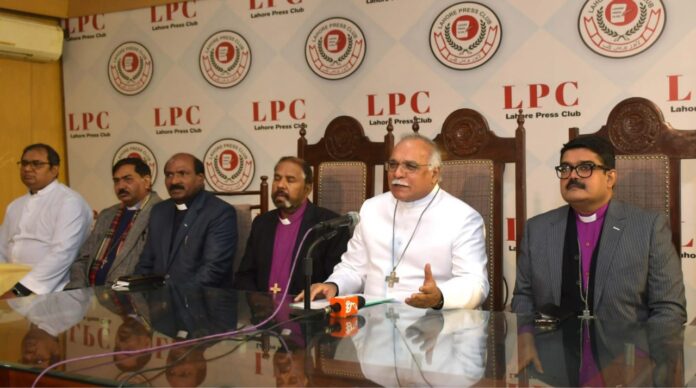 LAHORE: The senior leadership of Church of Pakistan on Tuesday strongly condemned the violence perpetrated by Hindu extremist elements on religious minorities in India in the recent years, demanding the Narendra Modi-led government to stop patronising such right-wing policies.

In his address, Bishop Azad Marshall said the leadership of Church of Pakistan is extremely concerned by the rise in attacks on Christians and other minorities in India. “India takes pride in being the world’s largest democracy but its brazen violations of religious freedom have laid bare its claims of being a truly secular country,” said Bishop Marshall.

He added that the US Commission on International Religious Freedom in its recent report has highlighted that the BJP-led government in India is promoting Hindu nationalist policies, resulting in systematic, ongoing, and egregious violations of religious freedom, which negatively impact non-Hindu religious communities, including Muslims, Christians, Sikhs, Dalits and Adivasis.

“The attacks on religious minorities, vandalism of minorities’ worship places, enactment of the Citizenship Amendment Act 2019 and persecution of Christians under the guise of action against religious conversions should be the issues of serious concern for the world,” he said, adding that the misuse of policies such as the Unlawful Activities Prevention Act and the Financial Contribution (Regulation) Act has enabled the Indian government to silence or restrict individuals and NGOs from reporting on and combatting religious persecution.

Bishop Marshall also called for the protection of minorities in Pakistan, saying effective legislation is needed to save underage minority girls from being sexually exploited.

He also announced that the church has established a helpline, where Christians can report their issues and get legal assistance.

The church leader also condemned the publication of discriminatory job ads, wherein only Christians are sought to fill positions of sanitary workers. “It is extremely heart-wrenching for the entire community and the government must end this practice. Our people have contributed greatly in health, education, defence and other sectors, but tagging Christians only for sanitation work is quite discouraging for the community,” he said.

He also criticised the results of the 2017 census and demanded a transparent and thorough enumeration of the Christian community in the next census.

The church leaders also demanded strict implementation of the education and employment quotas for minorities in all government institutes and departments.

May 27, 2022
MARSEILLE: A Johnny Sexton-led Leinster will take on 2021 runners-up La Rochelle in the European Champions Cup in Marseille on Saturday eyeing a record-equalling...