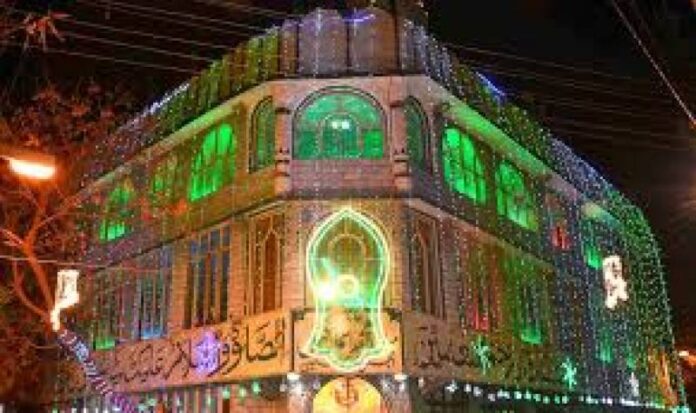 Faithful will celebrate Milad-un-Nabi (PBUH) on Tuesday across the country with religious and traditional zeal, renewing the pledge to transform their lives in line with the Islamic principles and disseminate teachings of Allah Almighty’s last Messenger across the globe.

The day will dawn with a 31 and 21 gun-salute in the federal and provincial capitals respectively to pay homage to Prophet Hazrat Muhammad (Peace Be Upon Him).

Special prayers will be offered in mosques for peace, progress and prosperity of the country, besides early liberation of Palestine and Kashmir for illegal occupation.

Prime Minister Imran Khan in special televised for 12 Rabi-ul-Awwal has asked the entire nation including the media and minorities to fully participate in Eid Milad-un-Nabi (PBUH) celebrations.

The premier said that this is a month of blessings and happiness as Eid Milad-un-Nabi (PBUH) is celebrated by Muslims as the birth anniversary of Prophet Muhammad (PBUH).

The PM said that Prophet Muhammad (PBUH) is a great leader of the world because quality of a great leader is to bring the people together and does not spread hate.

Prime Minister Imran Khan has also directed the Ministry of Religious Affairs to celebrate Jashan-e-Eid Miladun Nabi (PBUH) across the country and specially mobilize the youth to play their active role in this regard.

Imran Khan had also directed the federal ministers and members of parliament to celebrate Eid Milad-un-Nabi in their constituencies with full zeal.

The official of the Ministry of Religious Affairs and Interfaith Harmony while talking to APP, said that arrangements had been finalized for holding 46th International Rehmat-ul- Lil-Aalamin (PBUH) conference in the federal capital on Monday as part of Eid Milad-un- Nabi (Peace Be Upon Him) celebrations in a befitting manner.

The two-day conference, titled “ Role of Masjid, Madaris, Khanqas and Imambargahs for the promotion of Unity and Harmony in the light of teachings of the Holy Prophet (PBUH),” would be held on Rabi ul Awwal 11 and 12 (Monday-Tuesday) in Islamabad. National Assembly Speaker Asad Qaiser would be the chief guest on inaugural day of the conference.

The conference was the annual event of the Ministry of Religious Affairs and Interfaith Harmony since 1976. The main aim of organizing the conference was to highlight the soft image of Islam, disseminate the teachings of the Holy Prophet Muhammad (Peace be Upon Him) and also encourage the authors by giving them prizes on their outstanding books on Seerat and research papers written on the life of the Holy Prophet (PBUH).

On the day, big and small Eid Milad-un-Nabi procession will be taken out in the federal capital. Streets and roads, as well as bazaars, shopping centres, government and private buildings had been beautifully decorated and illuminated with lights, colours and banners bearing writings about the celebration of Eid Milad-un-Nabi (PBUH).

TV channels and Radio Pakistan will air special programs and newspapers would also publish special additions in connection with the day.