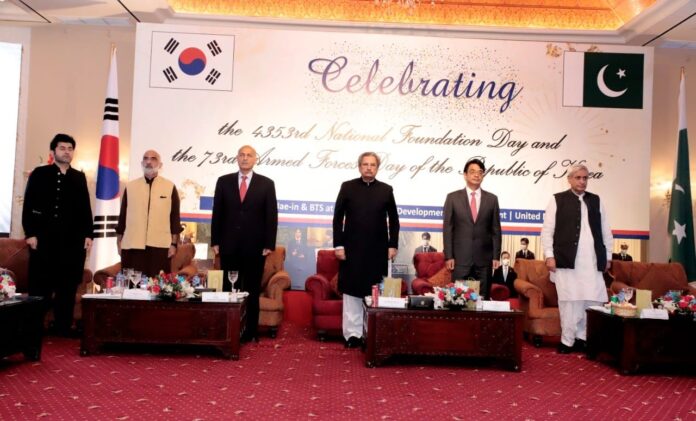 ISLAMABAD – South Korean Ambassador Suh Sangpyo has said that Pakistan and South Korea are all set to sign an MoU to preserve and promote Gandhara Buddhist heritage for which Korean government would release a grant of US$ 4 million.

Addressing a ceremony held here to celebrate the 4353rd National Day and the 73rd Armed Forces Day of the Republic of Korea, Ambassador Suh Sangpyo said that the MOU is expected to facilitate the Korean Buddhist Tourism project which was discussed when the president of Jogye order visited Pakistan in year 2019.

A cake-cutting ceremony was also held to mark the 4353rd National Day and the 73rd Armed Forces Day of the Republic of Korea.

“Korean music, dancing and drama are also popular in Pakistan. So there is much more areas to expand bilateral cooperation between Pakistan and South Korea,” he said and added that since establishment of diplomatic ties in year 1983, the relations of the two countries have increased rapidly in manifold areas.

“In particular, this year we have witnessed many concrete outcomes in our relations. In Political area, last Wednesday, Korean first Vice Minister came to Islamabad and held bilateral Political Consultation meeting with Foreign Secretary. During the current Afghan crisis, Korea and Pakistan are closely cooperating with each other. The two foreign ministers had a consultation by telephone and with full supports from the Pakistani government, 390 Afghan nationals were safely moved from Kabul through Islamabad to Korea,” he added.

In economic area, he said, Korean companies are increasing investments to Pakistan.

“In hydropower sector, already two hydropower plants are under operation producing electricity in Pakistan and the hydropower projects which account 2 billion in total are ongoing.

“In mobile phone business, Samsung electronics are establishing an assembly line Karachi and once established as planned by December, the factory will produce 3 million units of mobile phones a year and creating 800 local employees. And some of Korea-Pakistan joint ventures are already in Special Economic Zone,” he added.

The Ambassador said South Korea announced the provision of the Economic Development Cooperation Fund of US$ one billion for 5 years starting from next year.

“This fund is a soft loan to assist developing countries. The previous fund was US$ 500 million. Now in terms of the committed volume of EDCF, the number has doubled. Grant assistance from the Korean development agency, KOICA, is also active now, 5 projects ongoing amounting 40 million dollar and next year 2 more projects amount 15 million US dollar will be added up,” he added.

Minister for Education Shafqat Mehmood said that Pakistan and Korea have a multifaceted relationship. 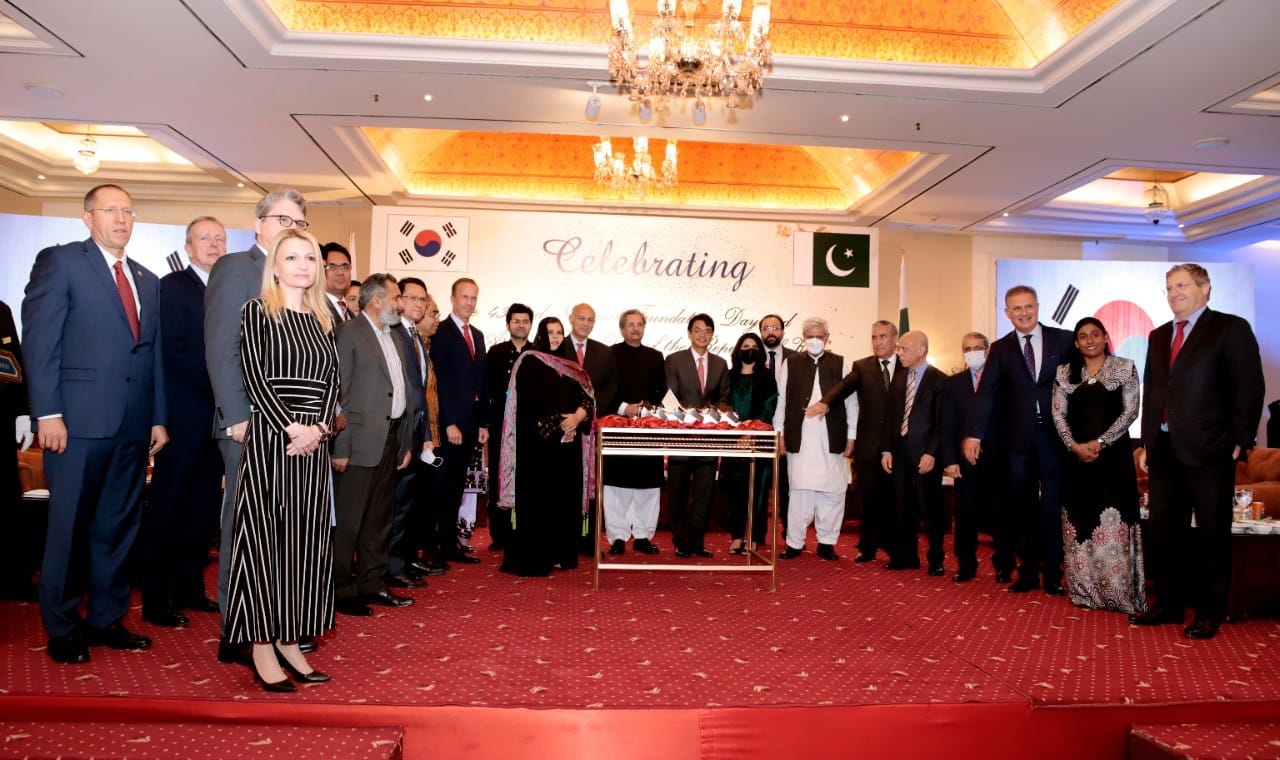 “There is a long way to go. Bilateral trade of 1.2 billion dollars which needs to be improved.

We deeply appreciate the efforts of Korean government to fight climate challenges and Pakistan is also contributing a lot to the cause,” he added.

He said that in the field of education, Korea has contributed a grant of 20 million dollars. We also are indebted to Korea for facilitating Pakistani labour. The Korean pop music and film industry are popular too. Pakistan is partner in peace and development with the world,” he added.

Speaking on the occasion, Senator Mushahid Hussain said that Pakistan and Korean people have a number of similarities.

“South Korea and Pakistan share the oldest unresolved issues with our neighbours. Recent geatures of peace between North and South Korea are encouraging. We need to promote people to people exchanges and further increasing ties in the areas of technological cooperation,” he concluded.