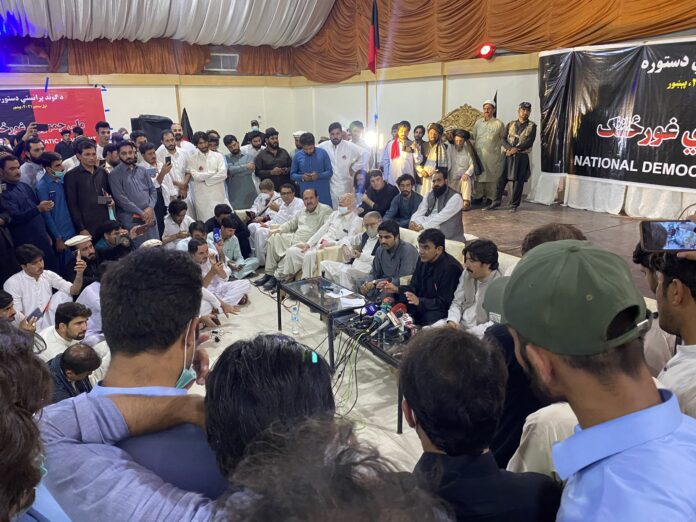 Flanked by senior political leaders, Mohsin Dawar announced the name, flag, and manifesto of his new political party in Peshawar, telling the media that the party’s central executive committee had appointed him as the chairman of the NDM.

“For a democratic nationalist political party, our workers used to miss a political organization. The NDM will soon form provincial units. Then the party will be organized at the district level,” said a beaming Dawar.

“Our political leaders will be a key part of our movement. The youth have not been given real representation in politics and political parties. We will elect a council to determine future leadership,” he said.

Distancing from the PTM, Mohsin Dawar said he was only a supporter of the PTM which is a non-political organization.

“So, we split up from PTM and formed our own party. I don’t think PTM will support our party,” he added.

The source said that Afrasiab Khattak, Bashra Gohar, and Jamila Gilani will be among the central leaders of the NDM while Mohsin Dawar will lead the party.

According to the source, the PTM leader and National Assembly member Ali Wazir, who is currently in jail, will not be part of the NDM, but other leaders including Sana Ijaz, Said Alam Mehsud have agreed to join the new party.

Since the formation of the PTM, Dawar was in favor of forming a political party, but Ali Wazir and Manzoor Pashteen have opposed this idea, the source asserted.

The source said that Mohsin Dawar is a prominent political operator who enjoys good relations with other parties and his political clout led to Manzoor Pashteen’s fears that he would hijack the PTM. Hence, the source said, Pashteen did not want to hand over the leadership of the PTM to anyone else.

It merits mention that Manzoor Pashteen has said on various occasions that the PTM will remain a non-parliamentary movement and will not participate in politics.

When Mohsin Dawar, Ali Wazir and Abdullah Nangyal decided to contest the 2018 general elections, Pashteen clearly stated that if any person belonging to PTM participated in the elections, it will be his personal decision and the PTM will neither support nor oppose the ones indulging in politics.