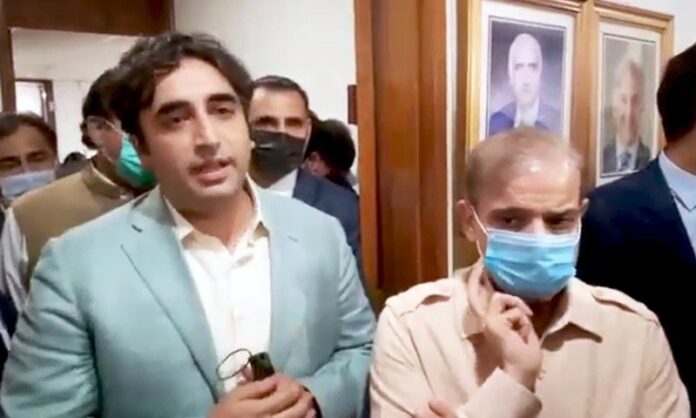 Leaders from the opposition parties have begun voicing their disapproval of the national budget for FY2021-22 introduced by Minister for Finance Shaukat Tarin in the National Assembly.

Pakistan Muslim League-Nawaz senior leader Ahsan Iqbal on Friday slammed the government’s proposal to increase the income of salaried individuals by 10 percent and called the move the “worst joke”.

“A 10 percent increase in the salaries after record inflation is the worst joke made by the government with them,” tweeted Iqbal as Finance Minister Tarin presented the federal government budget in the National Assembly. He added that the move was like “rubbing salt on their wounds”.

“We reject this. At least a 20 percent increase should be given,” said the former interior minister.

All eyes were on the parliament as Finance Minister Tarin presented the budget 2021-22 on Friday.

He announced that the total outlay of the budget had been kept at Rs8,478 billion and had set the tax collection target at Rs5,829 billion.

Amid the range of policies announced, the federal government increased the salaries and pensions by 10 percent.

Meanwhile, Pakistan Muslim League-Nawaz President Shehbaz Sharif said that they will give a tough time to the government in the parliament. He maintained that people were dying from starvation in the country but surprisingly the government claimed that the economy was improving.

He was talking to journalists following the National Assembly budget session in Islamabad alongside Pakistan People’s Party Chairman Bilawal Bhutto-Zardari, who said that they would thwart the budget in Parliament through the power of the vote.

Rejecting the federal government’s budget for the fiscal year 2021-22, Bilawal said that the opposition parties, despite differences, will jointly resist the budget in Parliament.

Lambasting the finance minister, the PPP chairman said that the people were facing record-high inflation and unemployment but it seemed that the minister was talking about the economy and budget of any other country.

The employees had gathered there after having travelled from different provinces, demanding a raise in salaries, wherein they stated that for the past three years, they had not seen any rise in pay.

They also demanded that contract employees be quickly regularised.

A large contingent of police was present outside the parliament to guard against any untoward incident.

The road leading up to the parliament was blocked off with barbed wire, but it proved unsuccessful to deter the protesters, who jumped over it.

The government employees blocked off Shahrah-e-Dastoor (Constitution Avenue) where the parliament and all other important buildings are located and staged a sit-in at the main gate of Parliament House.

The PPP chairman thanked the media for reporting this protest and said that the media should become the voice of the poor.

He hoped that the media will expose the injustices to the government employees as well as the poor people of Pakistan for the last three years of the PTI government.

The government claims that the economy is taking off and we are on economic progress then why the salaries of the government employees not increased, he said. The inflation in Pakistan has increased many folds, the poverty and unemployment have reached an unprecedented high level during the last three years, he added.

The government has the responsibility to increase salaries with the proportion of inflation in the country. The PPP and opposition demand to provide relief to the people and these injustices will not be tolerated anymore.

He said that he has directed the Sindh government to set the least wages at Rs25,000.

We will do everything in our capacity to stop this “Pakistan Tehreek-e-Insaf & International Monetary Fund” budget in the National Assembly, Bilawal maintained, adding that if this PTIMF budget is passed in the assembly then he will go to every nook and corner of the country to tell the people of Pakistan that they are suffering due to incapacity and inability of this government.

He said that only the people’s government can solve the problems the people are faced with. He assured the protesting employees that the PPP will run a campaign to get rid of this “PTIMF budget”.

Replying to the question, Bilawal said that they are demanding the government to act on the agreement it made with the employees. The government should increase salaries as the PPP had increased during its tenure in the government.

Separately, Pakistan People’s Party Parliamentarians Information Secretary MNA Shazia Atta Marri alleged that the federal government is not providing the due financial share to provinces as promised by it.

Shazia said that the economic survey data is not about facts and under the constitution, a fixed portion of the NFC award is given to the provinces.

Sindh is objecting that it is not getting its constitutional share, she said, adding that not only Sindh but the other three provinces are also not getting their share but they have chosen to remain silent.

She said that Sindh is constantly being abused. The PSDP is approved by NEC, which should hold at least two NEC meetings a year but only one meeting was held.

She said that Sindh’s share in NFC was Rs770 billion and in the last 11 months Sindh received only Rs613 billion so far, whereas it should have got Rs690 billion. She hoped that Sindh will get Rs147 billion more in the next month.

The PPPP information secretary said that the party does not want a reduction in the share of Balochistan, Khyber Pakhtunkhwa or Punjab. It was not expected that Asad Umar, who claims to know the constitution, would mislead the people, she added.

A day earlier, Pakistan Muslim League-Nawaz spokesperson Marriyum Nawaz on Friday termed the economic survey presented by Finance Minister Tarin on Thursday, one day ahead of the budget for the financial year 2021-22, proof of PTI government’s ‘anti-people’ policies.

In a statement, she said that Prime Minister Imran should have resigned prior to the presentation of the economic survey because the ‘incompetent’ and ‘corrupt’ PTI government’s finance minister had admitted during the presentation that there was an exceptional increase in the price hike, unemployment and loan borrowing.

Marriyum further said that not only that the government had also confessed to have pushed masses below the poverty line.

She further said that the PTI government in the survey had admitted that five million youth had become jobless during three years of its rule.

Similarly, she added, the PTI government had slashed expenditures on education both at the federal and provincial levels from 2.3 percent of the GDP to 1.5 percent. “This exposes Imran Khan-led government’s claim of spending on people’s welfare,” the PML-N spokesperson taunted.

She said that under the present government the income of daily wagers and labourers reduced considerably.

Moreover, a day earlier, PPP Chairman Bilawal said that the record rise in the unemployment rate in the country is the real image of change brought by Imran’s government.

He said that the people of Pakistan are buried under the burden of the PTIMF budget.

Bilawal further said that hiding statistics regarding poverty and unemployment and making excuses for inflation was not the solution for the prevailing issues. He said that if public issues will not be properly identified in the economic survey, then how will they be resolved.

“People are paying the high price of Imran Khan s incompetence in the form of inflation, unemployment and poverty,” he concluded.

ISLAMABAD: PPP stalwart Yousaf Raza Gillani on Monday became leader of the House in the Senate with the commencement of first session of the...
Read more
NATIONAL

May 23, 2022
LAHORE: The Punjab government has decided to transfer all those assistant commissioners (ACs) posted in different tehsils of the province who had allegedly been...

‘Muslim middle powers can no longer be dictated by West’