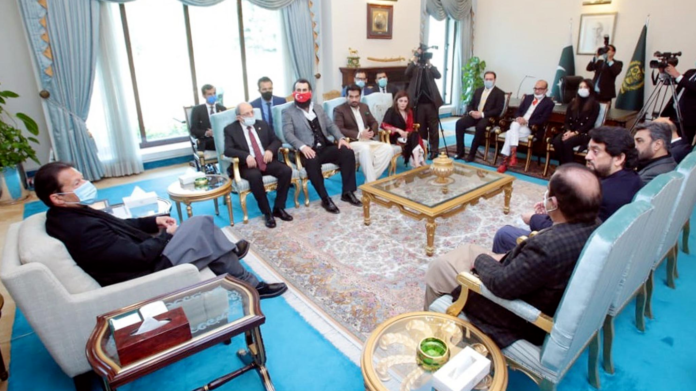 ISLAMABAD: Pakistan Prime Minister Imran Khan on Thursday urged the country’s film and drama industry to come up with a quality local production to provide the youth with a good alternative of substandard and glamorised content.

“If the Pakistani film and drama industry presents quality local production, it will not only progress but also provide the youth with alternative of substandard and glamorised content, which will be welcomed like Turkish series ‘Dirilis: Ertugrul’,” the premier said.

The prime minister expressed these views during a meeting with the founding team of the Turkish series, led by Kemal Tekden.

Minister for Information and Broadcasting Senator Shibli Faraz, Kashmir Committee Chairman Shehryar Khan Afridi and the representatives of Turkish and Pakistani film industry were present in the meeting.

The meeting discussed in detail the proposed television series, based on the role of renowned personality Turk Lala. The series will be produced through cooperation between Turkey and Pakistan.

The prime minister said that Pakistani dramas were very popular in the world until the decade of 1980s. The Pakistani film and drama industry need to work for the promotion of local culture so that the West-inspired youth could be made aware about their true culture and saved from social evils being faced by the new generation of neighbouring countries due to the telecast of Western content.

The premier said that it is unfortunate that the new generation is not aware of the golden era of Muslims’ rule in the sub-continent. “Efforts should be made to foil the designs of propaganda mongers by producing films and dramas on that golden era,” he said.

Shehryar briefed the participants of the meeting about the role of Turk Lala in the Khilafat Movement and Lala’s importance in Turkey.

The meeting also highlighted the importance of creating awareness among the youngsters about their past heroes.

Appreciating the PM Imran’s decision of telecasting Turkish dramas in Pakistan, Kemal Tekden said that Imran and Turkish President Recep Tayyip Erdogan share the vision that the creation of awareness among the youth about their history and culture is vital for the development of a country.

Tekden told the prime minister that June 30 is celebrated every year as a national day in Turkey in the honour of Turk Lala. “Television series on Turk Lala would not only create awareness among the youth about Khilafat Movement but also add a new chapter in Pak-Turkey relations,” he added.

The prime minister appreciated the project of television series and assured full cooperation of his government.

Punjab minister says no promotion without exams this year

January 19, 2021
ISLAMABAD: Pakistan Muslim League-Nawaz (PML-N) Vice President Maryam Nawaz, while addressing a protest outside the Election Commission of Pakistan (ECP), that is pursuing a...