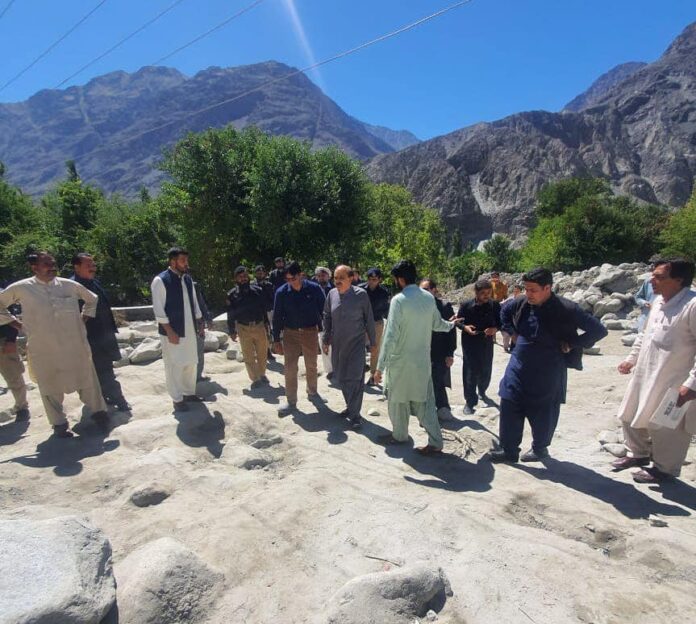 GILGIT: Mohyuddin Ahmad Wani, chief secretary of Gilgit-Baltistan, arrived in Chilas city of the picturesque region to assess first-hand the damage caused by historic floods, and to review the rescue and rehabilitation efforts in the Diamer district.

He was accompanied by Works, Home and Finance secretaries.

On the occasion, Diamer deputy commissioner briefed Wani about the damage and progress on the rehabilitation measures.

The official said the people hit by the floods have been provided food and relief goods.

Wani assured the victims of every possible assistance from the regional government to rehabilitate them and restore the damaged infrastructure.

In order to ensure effective utilisation of the resources, a team of Food and Information Technology secretaries with assistance from the Planning and Development Department and Finance divisions will visit Darel Valley and Tangir sub-divisions to verify the information shared by the respective departments.

“The flood victims were being compensated as per government policies,” said Wani.

He also reviewed the progress on decisions he took during his previous visits to Diamer. These included the provision of quality human resource (HR) to schools and colleges and RHQ Hospital, Procurement of MRI machines, and provision of Rescue 1122 equipment.

Wani was delighted to see that 37 teachers have been appointed to augment the HR in schools. He was informed the health department posted six medical officers and two specialist doctors in the hospital.

Projects for the provision of missing facilities in schools and colleges are also at an advanced stage, in addition to the establishment of a new hostel to retain female instructors and doctors based in Chilas in their home city.

Meanwhile, his office said Wani took stern notice of the absence of field staff from peripheries. He directed the Finance secretary to investigate the matter and, if found guilty, penalise them as per law.

He also directed to pay death compensation of Rs1 million apiece to the heirs of the people who died in the floods.

February 7, 2023
ANKARA: Rescuers in Turkey and Syria braved frigid weather, aftershocks and collapsing buildings Tuesday, as they dug for survivors buried by an earthquake that...