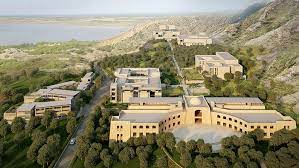 Pakistan Muslim League-Nawaz (PML-N) Leader Attaullah Tarar on Tuesday said the Punjab government had decided to withdraw the notification of land acquisition of 6500 Kanal in Mianwali to Namal University.

Addressing a press conference here at 96-H Model Town, he said that Imran Khan acquired 6500 kanal shamlat land in Mianwali for Namal University without paying land fee to the locals, adding that this land situated in front of a lake.

He said that this land was acquired aiming to utilize for personal purpose, adding that former prime minister Imran Khan misused his powers for acquiring this land.

Ataullah Tarar said that Imran Khan had also acquired land around 8000 kanal for Shoukat Khanum Hospital from the then Punjab Chief Minister Muhammad Nawaz Sharif in the 90s, adding that in the 80s, Imran Khan had also submitted application to Lahore Development Authority (LDA) Director General for acquisition of plot for residence as he claimed that he did not have personal residence in the country.

He alleged that Imran Khan belonged to Mianwali therefore he acquired this shamlat lake front land for personal use, adding that Imran Khan never declared its source of income within the country or abroad.

To a question, he said, “Hamza Shahbaz is the chief minister of Punjab and will continue as CM.”

To another question, he said the PML-N had submitted an application to Anti Corruption Establishment (ACE) against former chief minister Punjab Sardar Usman Buzdar to probe his assets of around 10 billions.