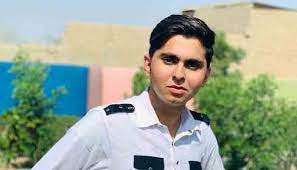 Fresh details of the alleged killing of a teenage boy, Arsalan Mehsud in Karachi have surfaced, after victim’s injured friend refuted claims of fake encounter on Wednesday.

Arsalan was allegedly shot by Orangi Town police late Monday night during what appears to be a fake encounter, while Yasir was injured.

Yasir, in his statement revealed what happened that evening and refuted claims that Arsalan was killed in an “encounter”.

The victim’s friend told the police that the suspected constable, Tauheed, and his comrade Umair, were not in uniform.

Yasir said he and Arsalan were riding a new motorcycle on their way back from a coaching centre. He said they were driving at a low speed when they were stopped by plain-clothed men, who proceeded to fire shots at them.

“I was struck by the first bullet, after which we fell off the bike,” said Yasir, as he narrated the series of events that night.

“The second shot missed us. Arsalan was struck by the third, and he collapsed on the road,” he said.

Describing the shooter as a man dressed in pants and a shirt, Yasir said the man reloaded his pistol, upon which he fled from there and has no clue of what transpired next.

Yasir told the police that neither he, nor Arsalan, were armed.

The Orangi Town police had claimed the shoot-out took place near the police station in Orangi Town No. 5. In the exchange of fire, they said, one unknown suspect was killed, while his companion fled. The police claimed they found one pistol with five bullets on the deceased.

Police had earlier claimed that they had tried to stop two men on a motorcycle at a picket. The two men, in response, opened fire instead of stopping, claimed police. Police said one of the suspects died while his accomplice managed to escape.

However, DIG West Nasif Aftab rejected the statement of the police officer who had shot at the victim, saying that the suspicious encounter did not take place at the picket. Rather, it took place at a distance from it, he said.

The DIG West said that one of the bullets hit Arsalan on his waist, which led to his demise. “The survivor, Yasir, was shot in the leg,” he said.

According to the DIG West, the on-duty police personnel who fired at the youngsters was in plainclothes, not in his uniform. The police officer involved in the incident has been taken into custody, he disclosed.

“A police official named Tauheed and a man identified as Umair tried to stop the young men near Orangi police station,” he said. “When the boys refused to stop, Tauheed opened fire on them.”

The Orangi Station House Officer has been suspended over the incident, while a three-member inquiry committee comprising SSP Central, SSP Investigation Central and SP Gulberg has been formed to investigate the incident.