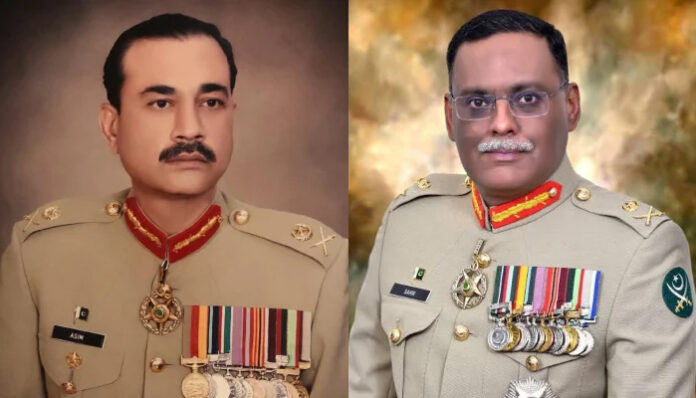 One of the effects of the recent promotion of the Chief of Army Staff and the Chairman Joint Chiefs of Staff Committee has been the fulsome praise of the seniority principle. However, that principle was only observed if its assumed that the COAS job is senior to that of Chairman. It is not a matter of reality: it is a matter of which officer is senior to the other.

According to the Higher Defence Organisation concept, according to which the office of CJCSC was created back in 1972, the occupant of this post would also act as Principal Staff Officer to the Commander-in-Chief (the PM) in time of war. The services were sold the idea because of failures of communication during the 1965 and 1971 Wars. In both wars, the two smaller services said they had no idea of what the Army was up to. This was particularly serious for the PAF, which was supposed to provide air support for the Army’s operations.

Part of the decision was to shift all three service headquarters to Islamabad. The Navy, which had to make the biggest shift, moved from Karachi, then the PAF moved from Peshawar, and the Army has not just failed to make the move from Rawalpindi to Islamabad, but divided the sector it was allocated, E7, into plots for senior officers, and now the biggest obstacle to its shifting is its lack of land in Islamabad. Meanwhile, E8 and E9 have been developed as Naval Headquarters and Air Headquarters respectively.

It must be remembered that the Higher Defence Organization was developed in the wake of the 1971 debacle, and was borrowed from the US Joint Chiefs of Staff Committee system. However, the US Committee, though it started in World War II, developed as a command authority for a nuclear power. The Chairman is PSO to the President in wartime. He is not the Commander-in-chief, but is pretty close to that position.

One hidden purpose of the HDO in Pakistan was to prevent a future martial law That it signally failed to do. One reason was a compromise, and a deviation from the original concept.

As conceived, the CJSC slot was supposed to have rotated among the three services. Only President Ghulam Ishaq Khan, while President, tried to resume the original concept. (He had been Defence Secretary when it was being formulated, and had discretionary powers of appointment.) The result was that Adm Iftikhar Sirohey and ACM Farooq Feroze Khan became Chairman. They also provide the only examples of a service chief becoming CJSC. Neither was promoted, already having four-star rank.

That was the deviation, but the compromise was more serious. When moving over to a Joint Chiefs system, the service chiefs are supposed to stop being commanders of their forces, and serving purely as chiefs of staff. The forces are to be placed under tri-service commands.

For example, the USA’s CENTCOM (Central Command) is generally headed by a Marine four-star officer, who has under him a three-star Army officer who is commanding general of all CENTCOM troops, a three-star admiral who commands all of CENTCOM’s ships, and a three-star USAF officer commanding all its planes. These officers, and the forces under their command, are not operationally under their service chiefs’ command; the service HQs will insytruct them on training doctrine, equipment and even uniforms, but orders to deploy, and shoot, come from the Commander CENTCOM or the President. They cannot come from the CJSC, though he will be in the room if the President is giving the orders.

In Pakistan, however, the three services insisted on their respective chiefs retaining the command of their respective forces. That has made it impossible to form tri-service commands. It also meant that the Army’s ability to implode Martial Law remained as before. It must also be noted that only the Army can impose military rule, because neither of the other services have any troops.

However, in the Musharraf years, Pakistan had to adjust to its nuclear status, and also allay foreign concerns about the safety of nuclear weapons, that led to the formation of the Nuclear Command Authority, and of the Strategic Plans Division. The SPD is part of Joint Services Headquarters, and can be headed by a three-star officer from any service, but so far the Army has maintained a stranglehold on the post. With a major general commanding the SPDF, the Army controls the nuclear arsenal, and provides the world community that Pakistan is a responsible nuclear power.

India’s also taking that path, and the creation of the position of Chief of Defence Staff is necessitated only because of the need of a higher organization to handle nuclear issues. Russia and China have placed their armed forces under military commissions, and in China, the Secretary General of the Party is Chairman of the Commission.

The Zia years saw the rotation principle jettisoned, and the post became a sort of consolation prize for one lieutenant-general who didn’t make COAS. The Army opposes rotation, because it has more three-star officers than the other services. Before the HDO, the Navy and Air Force Commanders were designated Deputy Commanders-in-Chief, the head of the Army being the Commander-in-Chief, and were three-star officers.

At this time, there was one tri service command, the General-Officer-Commanding-in-Chief East Pakistan. An Army lieutenant-general, the naval and air force commanders reported to him for operational purposes, not their service headquarters. As the name reveals, it was an Army preserve. Having a three-star officer from either of the two smaller services would have meant having a three-star officer in addition to the service chief.

Whether or not the present COAS looks at it as a priority to get the Army out of politics, the country’s reputation is one with the military playing a major role. A quote from The Concepts and Theories of Modern Democracy is typical: “There were examples of rule by the military, and Pakistan has been a modern example for much of the period since 1947. These were all self-serving ruling groups who adjusted their policies to pressures from the wider society they governed only when prudence dictated it.” The book is an academic study. Pakistan cannot be proud of its reputation.

An apparent innovation has been that the apparent extension of the concept of supersession. Lt Gens Azhar Abbas and Faiz Hameed have opted for retirement. They are both junior to General Asim, but stand no chance of succeeding him, as they were to retire before his tenure ended. Previously, officers retired only when a junior is promoted and they are not. However, under the up-or-out policy of the USA< which has been introduced in the Pakistani armed forces, if one misses promotion, one is retired. In short, if you don’t move up, you move out. Normally, this has not applied to lieutenant-generals, but the retiring officers seem to have applied it to themselves.

One of the dangers of the seniority principle is the tendency for it to degenerate into Buggins’ Turn (Buggins being someone of the right seniority, but wildly unsuitable). True, by the time an officer reaches three-star rank, he has been through reviews at each rank, and anyone is probably suitable for the job, but the system depends on rigorous selection at each rank from major upwards. Seniority is already a consideration, and if it creeps in much further, the process could result in Buggins’ Turn prevailing. After all, one of the causes of the 1857 Indian Mutiny was a senile officer corps, in which promotion went too much by seniority.

February 7, 2023
ISLAMABAD: Election Commission of Pakistan (ECP) was in touch with the Ministry of Interior and Defence for the deployment of Pak Army troops/ Frontier...