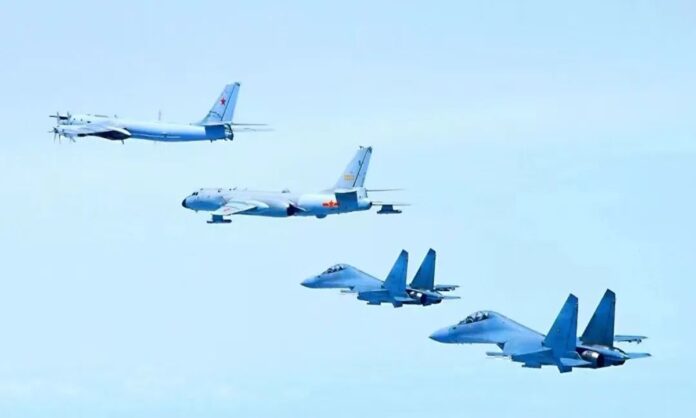 ISLAMABAD: Chinese and Russian militaries conducted a joint aerial strategic patrol in the Asia-Pacific region on Wednesday, the first time Chinese aircraft have landed in Russia and Russian aircraft have landed in China in such a joint patrol, and the first time the two countries have organized joint aerial patrols twice in a year. Analysts said it reflects a high level of increasing military cooperation and mutual trust that contributes to peace and stability in the region and the world.

According to the annual military cooperation plan between the Chinese and Russian militaries, the two countries’ air forces organized and carried out a regular joint aerial strategic patrol over the Sea of Japan, the East China Sea and the West Pacific on Wednesday, reads a statement released by China’s Ministry of National Defense on the day.

For the first time in the course of joint patrols, Russian aircraft landed at an airfield in China, and Chinese aircraft landed on the territory of Russia, according to the Russian statement, which also said that the Chinese and Russian crews acted in accordance with the provisions of international law without violating the airspace of foreign states.

In addition to the aircraft, China sent the Sovremenny-class destroyer Taizhou and the Type 054A frigate Huanggang to the Sea of Japan, as they sailed through the Tsushima Strait into the region from Monday to Tuesday, according to press releases from Japan’s Ministry of Defense Joint Staff.

This marks the fifth China-Russia joint aerial strategic patrol overall, with the first taking place in July 2019, the second in December 2020, the third in November 2021 and the fourth in May 2022, which also means that this is the first time the two countries have carried out such an operation twice in a year, observers said.

The exchange visits of warplanes to airfields in each other’s territories and the frequency increase of joint patrols from once a year to twice shows further growth in high-level military cooperation and mutual trust between China and Russia, a Chinese military expert who requested anonymity told the Global Times on Wednesday.

China and Russia are expected to deepen similar military cooperation in the future, and while they do not target any other country or third party, they will contribute to peace and stability in the region and the world amid uncertainties, with the US attempting to replicate the Ukraine crisis to the Asia-Pacific region with hot topics like the Taiwan question, the South China Sea issue and the Korean Peninsula issue, the expert said.

Only a day earlier, Chinese air and naval forces warned away the USS Chancellorsville guided missile cruiser when the latter trespassed into waters around the Nansha Islands in the South China Sea on Tuesday without China’s authorization.

During the meeting between Chinese State Councilor and Defense Minister General Wei Fenghe and US Secretary of Defense Lloyd Austin last week, Wei drew the red line of the Taiwan question once again, after the PLA conducted large-scale military exercises around the island of Taiwan following US House Speaker Nancy Pelosi’s provocative visit to the island in early August.