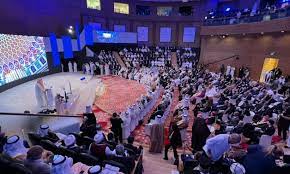 Jeddah: Secretary General of the Organization of Islamic Cooperation (OIC) Hissein Brahim Taha participated in the Bahrain Forum for Dialogue, organized in Manama on 3 and 4 November 2022, under the theme: “East-West Dialogue for Human Coexistence.”

The Forum was organized by the Muslim Wise Men Council, the Supreme Council for Islamic Affairs in the Kingdom of Bahrain and the King Hamad International Centre for Peaceful Coexistence. More than 700 participants attended the Forum including prominent figures, leaders, and representatives of religions from across the world, intellectuals and journalists.

The Forum was organized in the context of the Kingdom of Bahrain’s policy, orientation and constant strive to build and enhance bridges dialogue between religious leaders, intellectual, cultural and media icons in the East and the West.

During the Forum’s opening session, the Secretary-General paid tribute to the Kingdom of Bahrain for its efforts in supporting just causes of humanity, spreading the culture of quiet and purposeful interreligious dialogue, advancing opportunities for peaceful coexistence among people and consolidating the principles of tolerance, solidarity and coexistence.

After recalling the OIC’s initiatives to enhance the chances of constructive civilizational and cultural dialogue with all partners who share the objectives, the Secretary-General emphasized that the Bahrain Forum for Dialogue is an auspicious opportunity to send a strong message condemning all forms of extremism, hate mongering and racism; calling for concerted efforts by religious leaders to spread the notions of justice, tolerance, solidarity, synergy; and eschewing violence, contempt for others and intolerance for a particular gender, colour or religion.

The Secretary-General ended his speech by focusing on the importance of the Forum for building bridges of communication, dialogue and providing a promising intellectual and cultural environment that will assist in formulating innovative responses to the myriad challenges facing the contemporary world.