The Rakhshan University Act has been passed, but it has not yet been set up 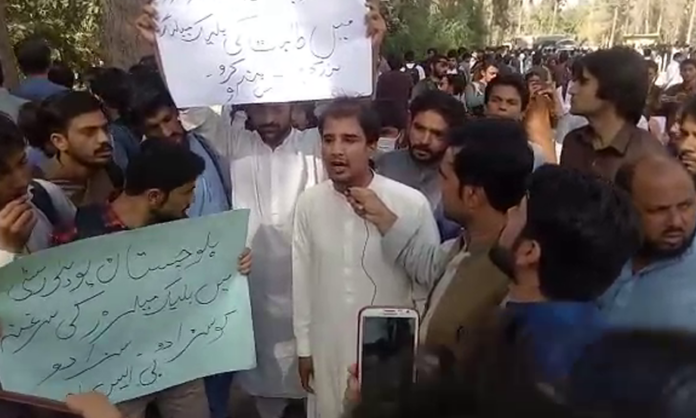 In November last year, Balochistan University’s students were found sitting for a long 20-day sit-in within the university premises against the ‘enforced disappearances’ of two Baloch students, Sohail Baloch and Fassieh Baloch, students of Pakistan Studies department, from the hostels of the university. After successful negotiations with a government committee, the students froze their protest. But the students are yet not released despite the passing of almost a year now.

All in all, things have been in an opposite direction when it comes to Baloch, Balochistan and education. Although Balochistan is said to be the most ‘illiterate’ in terms of literacy rate with more than 70 percent of out-of-school children, a ‘colonial’ tactic is used against the existing few students in institutions whose education too can go wasted. The governments need to think of promoting education in Balochistan to solve the necessary ‘Baloch issue’ as part of the whole system, or else things can go very awry in the near future

Not long ago, similar cases occurred in Gwadar and Turbat (Makran division of Balochistan) where Baloch students were ‘forcibly disappeared’ when on their way to their respective institutions. Following that, a similar case was of Hafeez Baloch, MPhil student of Physics in Quaid-e-Azam University Islamabad, who was taken off by unknown armed masked men from a tuition in Khuzdar and later shown to have been arrested from Jhal Magsi. He was released after the prosecution failed to prove his guilt. But he had to face dungeons for some years though innocent.

Not very long ago, another Baloch student Beebagr Imdad was whisked off from the varsity hostel of University of Punjab (Lahore) with the help of the security in-charge of the university early in the morning. After a protest sit-in of Baloch students in the university, Mr Imdad was released. But no one was held accountable, nor was any action taken against any of the involved personnel.

This is how Baloch students have been faring from November last year till date, excluding the long march of Baloch students from Multan to Lahore and the other contemporary issues of the students prior to that. Within this new wave of harshness, they feel insecure within their respective universities now.

Apart from this, Baloch students are presently going through two more dramatic issues: one, the Baloch students of Bahawalpur’s Islamia University are protesting against the university administration who are charging 50 percent fees on reserved seats which the government already pays to the university. Secondly, Baloch students of Kharan have taken to the roads against non-execution of the bill passed for Rakhshan University while the present sub-campus of University of Balochistan has only three departments which, too, owing to strict rules of Higher Education Commission, are going to be shuffled, enhancing the chances of the closure of the campus, causing a lack of fundamentals of a higher institution there.

Instead of sitting with the students and entering into negotiations, the varsity administration chose the forceful means by compiling a list of some nine students of Balochistan and expelling them from the university in the name of ‘discipline’ and ‘distorting law and order situation’.

Was speaking against brutalities being inflicted on them a violation of law and order? Was protesting within the legal framework of the Constitution their crime? Or because they were Baloch and belonged to Balochistan, hence, everything they did– even if under the umbrella of la – was deemed ‘illegal’ and that disturbed ‘their’ peace? The administration has been reluctant to provide further arguments on certain points that students raised.

“The more students will resist, the more students will be expelled by the varsity,” said a student in grief and anguish. “They do not know what a student from Balochistan has to go through to reach this position.” A certain disgust is found among the protesting students, but despite all, they seem tireless and committed to face anything they have to. “The focal person of the varsity visited us and told us the other issues would be resolved, while he was reluctant to speak on administrative behavior towards Baloch and fees, which are two of our main demands,” he added. Now that the university has initiated expelling students, it is likely to boost the confidence of all the other students to stay more committed in their protest, they believe.

Amidst all these harsh treatment either from other provinces or from the federal government, the Baloch have learnt to become independent of worries of being expelled or they are at least used to dealing with challenges as suspension. For them, all that matters is resistance and ‘snatching’ their rights which are, almost, rarely given to them. They are suppressed through different means though, but all they can do is to resist. “And we shall resist till the end,” he added.

On the other hand, Kharan witnessed a huge number of people on roads against not providing them opportunities of possessing a higher institute of their own. The only sub-campus that existed of Balochistan University in the whole Rakhshan division had only three departments which were very few and could not accommodate students with interests in other fields. Better for the whole division, the bill for Rakhshan division, passed last year, must be implemented and a full-fledged university should be established to end the grievances of the students in Rakhshan.

All in all, things have been in an opposite direction when it comes to Baloch, Balochistan and education. Although Balochistan is said to be the most ‘illiterate’ in terms of literacy rate with more than 70 percent of out-of-school children, a ‘colonial’ tactic is used against the existing few students in institutions whose education too can go wasted. The governments need to think of promoting education in Balochistan to solve the necessary ‘Baloch issue’ as part of the whole system, or else things can go very awry in the near future.