The floods are a security threat 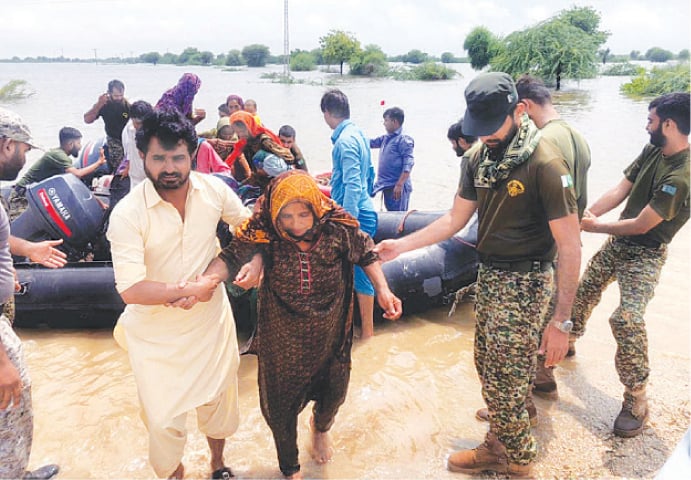 The territorial integrity of any sovereign country possesses vital importance to its national security. In the past, all the major powers of that time indulged in wars mainly over territorial conflicts, till the Treaty of Westphalia signed among the European powers in 1648. The Treaty of Westphalia formally recognized the sovereignty of any state over its territory and ended the prolonged war in Europe. Traditional security challenges have always been present, flaming up conflict between or among sovereign states over territorial issues. In traditional security challenges, direct military conflict is involved and the powerful utilize all-out efforts to dominate others.

During early eras, security threats were mainly conventional or traditional but in the contemporary world, non-conventional security threats gained tremendous importance. There are many countries which are facing non-conventional security threats in various aspects. Pakistan is among those countries which are directly exposed to non-conventional security threats. It is such a state, which has handled direct traditional threats from India at the Line of Control (LoC) and militant insurgency at Afghanistan and Iran border on one hand; and overpopulation, terrorism, food insecurity, poverty, infectious diseases, drug-trafficking, human smuggling, climate change or environmental degradation, and more, on the other. These issues are directly linked with human security, exacerbating their lives. The population explosion has a huge impact on the economic stability of the country, generating poverty, unemployment and making available resources inadequate to the rampant population. Similarly, other issues of terrorism also contribute troubles to  masses. Incidents of terrorism have been taken place, creating an environment of fear and worry across the country. Resources scarcity and their dispensation to folks have enhanced security threats. Drug trafficking and human smuggling are causing human security threats.

But the paramount human security challenge the country is confronting right now, is climate change or environmental degradation which has hurt Pakistan since its birth. Pakistan, being a developing  country, has less economic resources, debilitated governance structure and a weak communication network among different functionaries of the government institutions. Bearing in mind these facts, it becomes challenging for the country to tackle the natural calamities. Recently, Pakistan faced the brunt of extreme heat due to global warming and is currently facing unprecedented rainfall which has aggravated the situation.

Torrential rains have caused massive damages to people, their livestock and to the standing crops across the country. As per the official data, 33 million people have been affected by these unprecedented rains. According to the National Disaster Management Authority, about 1 million houses have collapsed, 10 million people are homeless, the death toll has reached above 1500. Many diseases and epidemics have broken out in flood-hit areas. Due to unavailability of clean drinking water, many children are suffering from cholera. Disaster has badly affected the masses. Thousands of hectares of agricultural land has been submerged in water, causing huge damage to the standing crops. The catastrophe is much bigger than our resources.

Still Pakistan is included in top ten vulnerable countries to climate change and the result is apparent. Moreover, owing to crop damage it is feared that we might face food shortage in the coming days as food prices have already skyrocketed. The economic situation of the country is getting worse and it is becoming an uphill task to cope with the looming crisis created by the unprecedented floods wreaking havoc across the country, destroying millions of acres of agricultural land.

The occurrence of natural calamity posed a serious threat to the people of Pakistan and they are in need of emergency relief on an urgent basis. In this regard, non-governmental organizations (NGOs) are working round the clock along with civil and armed forces and with government officials to help the flood-hit masses in this hour of need. Supporting aid from the other countries has also started coming to Pakistan to extract the distressed mass out from their miseries and agonies. China, Turkey, UAE, European Union, USA and other friendly countries expressed deep grief over the natural disaster and released aid packages to the flood-hit people.

At this hour of need , all the concerned stakeholders and political leaders must come forward to deal with this calamity, putting their animosity aside for a while and taking some solid measures to reduce the miseries of people. Non-conventional security threats to human beings have been deeply rooted in the social fabric. According to the Paris Agreement in 2015, 40 percent of the carbon emissions needs to be cut down, which becomes an immense task after the pandemic.

Facebook
Twitter
Linkedin
WhatsApp
Email
Previous articleIt would be foolish for Myanmar to think Bangladesh weak
Next articlePolls to be held in time ‘come what may’, Shehbaz, Nawaz agree

Muhammad
The writer can be contacted at [email protected]