Khan’s submission to the law

Khan had to appear at last 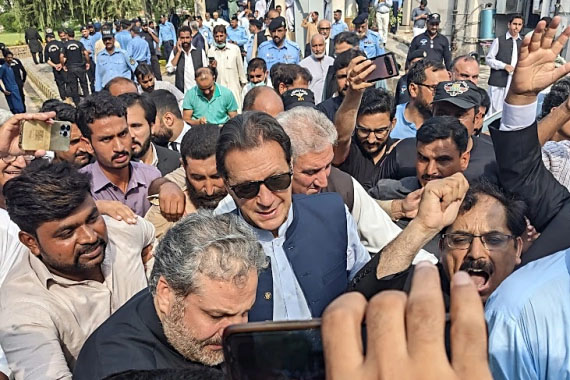 Finally, on September 14, in compliance with the orders of the anti-terrorism court, Chairman Pakistan Tehreke Insaf (PTI) Imran Khan had to appear before the Islamabad Police’s Joint Investigation Team (JIT) in a terror case for threatening Additional Sessions Judge Zeba Chaudhry during a public rally in Islamabad on August 20. Khan had also threatened the police officials of consequences. On September 12, the anti-terrorism court had extended his pre-arrest bail for the second time.

Khan had to answer the questions and record his statement before the JIT at the office of the Senior Superintendent of Police (investigation), Islamabad. The submission came after all dilly-dallying. However, the police had persisted with the demand and served the third notice for his appearance. Section 7 of the Anti-Terrorism Act governed the case. Khan’s appearance before the JIT was the first step towards submitting to the rule of law. One can also say that the law has started asserting itself. With that, Khan’s assumed de facto status of “exemption” is over.

The major challenge before the central government is not Khan (or his party) but the economy, which stood in tatters on April 10, the day the coalition government assumed power. In the meantime, the government would appoint the next army chief. This is the act that would disappoint and disillusion the PTI, both leaders and workers, of the prospects of coming back to the National Asembly with a thumping majority with the help of Khalai Makhlooq (the angels who cast votes for the PTI).

Though Khan has not performed any act of terrorism per se, the allegation (or the charge) revolves around his intent to do so. Khan is also guilty of vocalizing his intent of retaliation against the judge and the police officials to the public which, after getting incited, could also resort to any act of vandalism and terrorism. Here, the application of Section 7 of the Anti-terrorism Act is meant for forestalling any untoward act. The deterrence facility offered by Section 7 is what enmeshes Khan, who stands debarred from issuing any such statement of intimidation in the future or infuriating his followers into unsettling life in the streets.

The whole case assumes gravity when seen against the statements of the PTI leaders who had been threatening the repeat of Sri Lanka-like mayhem in Pakistan since April 10. Khan’s statement was also taken as an attempt to provoke violence and hooliganism imitating Sri Lanka. The objective was to bring the sitting central government to its knees and get general elections announced. Khan’s appearance before the JIT meant that not only the dream of constructing Sri Lanka in Pakistan was over but also the demand of securing general elections was frustrated.

Khan has now realized that he cannot make Pakistan act like Sri Lanka and that he has to deal with the police by presenting himself before it. Similarly, he has realized that general elections are not round the corner.

After coming out of the JIT’s demesne, Khan told the media that free and fair elections were the only solution to the economic crisis. However, his genius could not tell the relationship between the two. He still considers that the loan amounting to $52 billion that the PTI-led government secured during its three year stint in power was not the reason for overburdening the economy. Similarly, he thinks that the way the PTI-led government violated the terms of its agreement with the International Monetary Fund (IMF) in February this year was not the reason for the economic crisis the country has been passing through.

Khan’s willful ignorance to the IMF’s report on Pakistan issued on September 2 is awful. The report indicated that for the current financial year, the fiscal deficit mounted by more than 1.5 percent of GDP, which missed the end-June fiscal target by a wide margin. This happened because of incorrect economic policies adopted by the PTI-led government. The consequences are faced by common people. The recent floods have offered a double whammy.

Khan has developed an interesting knack for fastening everything to the call for general elections. He stands short of saying that the floods can be controlled if the general elections are announced. Outside the JIT’s realm, Khan also warned that the government could not withstand his protest call.

It is known that the trump card Khan is holding fast is the protest call. Perhaps, he has realized that the long march was an arduous task especially when the help of neither Allama Tahirul Qadri nor the intelligence agencies was available, as it was in 2014, in the Azadi March. This time Khan thinks that the PTI workers are charged enough to choke the main arteries of every big city and that the PTI workers can resort to the kind of protest insurmountable by the sitting central government. Khan is heavily relying on the volatile status of his party’s workers, though Khan overlooks that, on May 25, his party workers in Punjab failed to cross even the River Ravi in the face of resistance offered by the police. Section 144 dissipated all efforts of the PTI to initiate a long march on Islamabad from Lahore.

The floods have also frustrated Khan’s efforts to contest by-elections. On September 8, the Election Commission of Pakistan announced the postponement of the by-elections which were to be held in 13 constituencies of Sindh, Punjab and Khyber Pakhtunkhwa. The announcement shook the PTI’s hubris to be an all-time winner by sentimentalizing the masses. Nevertheless, outside the JIT office, Khan also said that he was ready to negotiate with the government but only on the topic of free and fair elections. It means that no negotiations are possible.

Apparently, Khan has got entangled in one law or the other. His submission to the law is belated. He also seeks refuge in ignorance of the law. He has yet to submit an unconditional apology to the Islamabad High Court. Before that he has to seek mercy from Judge Zeba Chaudhry.

Khan is not realizing that the option of being heard through protest calls is almost over. The current coalition government at the Centre is determined to complete its term. General elections may not be held before time on mere protest staged by the PTI.

The major challenge before the central government is not Khan (or his party) but the economy, which stood in tatters on April 10, the day the coalition government assumed power. In the meantime, the government would appoint the next army chief. This is the act that would disappoint and disillusion the PTI, both leaders and workers, of the prospects of coming back to the National Asembly with a thumping majority with the help of Khalai Makhlooq (the angels who cast votes for the PTI).