Perils of development and eco balance

Pakistani floods; more due to  human factor than nature alone 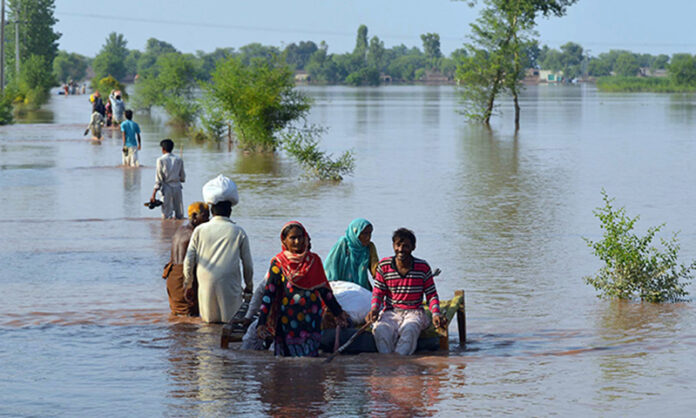 Floods in the South Asian context have been synonymous with overflowing rivers during the monsoon, which in that part of the world stretches between May to August, starting with rains in Assam and East Bengal in May and terminating the season in out limits of Punjab and Sindh in August. Traditionally, the start of the monsoon is embedded in the traditional local calendar. It is called  “Sawan”, meaning widespread rains, between July 15 to August 15 every year.  “Bhadoon”, between August 15 to September 15, follows it. The clear skies are associated with “Aswaj” onwards.

With the development of the cities as urban centres, which attract a major chunk of economic activity and migration within, the eco balance has given way to haphazard development. The result of that state of affairs has been the chaos, which we all are witnessing as “urban flooding”.

The economy, which was already afflicted with stagflation and rising cost of living, is faced with major agricultural produce shortages. In other words, the “food security” aspect of the Pakistani economy, which saved many a day for the system and society, is now absent. Skyrocketing prices of agricultural produce indicate that unless the situation comes to normal in the rural belt, the kitchen basket impact on inflation will not subside; consequently, all the IMF plans for economic recovery will go down the drain

Today, flood is not the swelling of the river like Ravi threatening Lahore, as it did in 1956, or which it almost flooded in 1973, or Muzaffargarh facing the Chenab in 1976 or the Jhelum in 1992. It is now the failure or breakdown of the urban drainage system. That failure has given rise to an almost annual feature of major city roads submerged in water; causing loss to lives, and property, moveable as well as immovable.

The reason for that state of affairs lay in the utter disregard of the environmental safeguards, which the various tiers of government; federal, provincial and municipal were supposed to observe. Cities like Islamabad, with plateau gradient and exceptional greenery, were able to weather the threat of urban flooding. However, cities like the neighbouring Rawalpindi, the lone port city of Karachi, old city structures like Peshawar and Quetta were not; making an uncomfortable way for the new developments and housing colonies. Here we may not ignore the swelling cantonment cities which were unable to provide housing to the standing cadre; whether a city like Karachi catering to the Navy or Quetta catering to the Army and the Air Force.

The cumulative impact of that strategy has been; we see an absence of green belts in major cities except for Lahore. In Lahore, there were environmental pressure groups who were successfully able to battle City governments during the Musharraf government and later the ambitious CM of Punjab, now the PM of the country; to balance out concreting the city with green patches at the same time.

In Karachi, the main culprit has been the free rein given to the builders to build as much as they can; wipe out trees and green areas as they will. The initial response from nature was that Karachi during the period starting from 1977 uptil 2008 lost much of the traditional climate trajectory it used to have. That period was characterized by sporadic precipitation in the form of cyclones and erratic weather systems. Obviously the city administrations wrote off rains as a regular feature; running the city based on expedient solutions. The intense impact of global warming and the greenhouse effect, which caused a global heat wave of huge proportions; it was all natural that Pakistan would be part of the devastation.

One of takeaways for the coastal belt in Sindh as part of global warming; was the return of monsoon season in the coastal belt including Karachi with intensity not observed before. The year 2020 saw the first instance of its destructive nature; with the repeat observed in July/August 2022.  Further the monsoon changed its track and caused much more devastation in interior Sindh, than has been the historical trend.

As a consequence, the monsoon is no more a season to rejoice now. Gone were the days of traditional monsoons when mothers would prepare ‘Pakoras’ for the kids as rain started to pour. Now parents worry how they can avoid the overflow of water in the street into their premises if they are on the ground floor. The other worry is to find a tilted pipe to get the automobile going on the road; which must resemble a river. The absence of greenery deprived the falling water the opportunity to be absorbed decently into the land and thus minimize the prospects of stagnating water on the roads, open spaces or in the residential areas or markets.

Administrative chaos regretfully became the characteristic of the tiers of the government in the period of three decades all over the country.

Practically 2010 can be cited as the last year when Pakistan had major river-based floods. In 2011, Sindh had a short spell of rains in August/ September that caused localized urban and rural flooding. That flooding caused a massive failure of crops that particular fall.

The current monsoon, which was over stretched on the count that it covered much of Balochistan, the river catchment areas in Afghanistan and even devastated Iran, the impact in Afghanistan translated rapidly into a dire situation for bordering Pakistani resorts like Kalam and Swat. That flood was a mix of urban flooding coupled with human mismanagement factors.

It may be pointed out that the neighboring area in Afghanistan and the bordering Pakistani KPK districts are covered by the Hindukush mountain range. This mountain range is a natural barrier for free flowing monsoon winds, causing rains. The stream networks in these mountains and valleys automatically swelled rivers, which cross into Pakistan and coincidentally pass through major resorts as if fair weather water falls.

The year 2022, however, proved to be otherwise. The videos available on Twitter can allow any viewer to gauge the fact the swelled streams devastated much of the infrastructure in the hill resorts causing massive urban flooding of a magnitude not seen before. The passing streams were literally treated in the same manner by the provincial government in KPK; the way the provincial government treated the natural drains in Karachi, Hyderabad, Larkana and much of the urban and rural Sindh during the same season.

With so much strain on the water flow due to obstructive urban structures, it was an obvious outcome that these structures fell like the house of cards when the water pressure in these streams was intense; the instances witnessed in Kalam and Swat.

The devastation out of the greenhouse effects or heat wave, whatever we may call it, has exposed the administrative inefficiency, coupled with a vicious cycle of recession for the state, society, economy and polity. Government apathy has given rise to general repulsion of the affected people to the politicians as well as dwellers of the other Pakistan; the middle-income urban Pakistan. Today, the common person in Sindh, KPK, Punjab or Balochistan is intellectually disconnected from his fellow compatriots in urban areas. However, they may face the same inefficient government structures; but the misery is manifold in the former.

The economy, which was already afflicted with stagflation and rising cost of living, is faced with major agricultural produce shortages. In other words, the “food security” aspect of the Pakistani economy, which saved many a day for the system and society, is now absent. Skyrocketing prices of agricultural produce indicate that unless the situation comes to normal in the rural belt, the kitchen basket impact on inflation will not subside; consequently, all the IMF plans for economic recovery will go down the drain.

The urban flooding and impact of the heat wave experienced in the April-June period may be blamed on carbon emissions by the government to the world at large to push the real cause of the debacle beneath the rug.  The fact of matter is that the November 1970 Cyclone in the then East Pakistan sealed the fate of that federating unit’s association with the rest of Pakistan. The current crisis can be construed as a multiplier to descent of the polity and the state into crisis; whose final outcome might be what we as Pakistanis might not have contemplated in the first place.

January 29, 2023
MULTAN: Multan Chamber of Commerce and Industry's (MCCI) sub-committee for liaison with government met here Sunday and proposed that department concerned should introduce a...