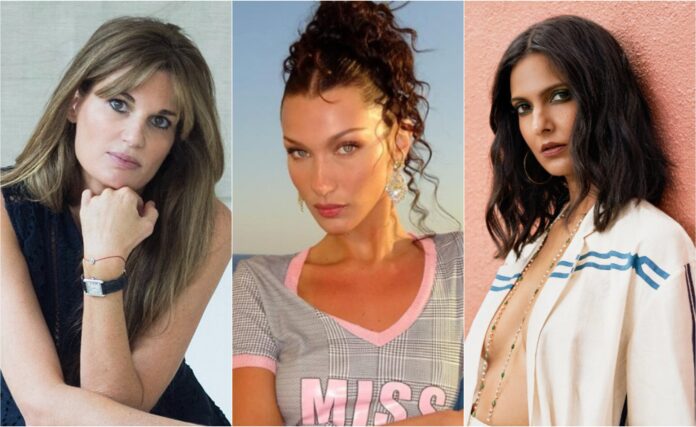 Severe flash floods in Sindh, Balochistan and Khyber Pakhtunkhwa have wreaked havoc in Pakistan, prompting analysts and world leaders to hunt for new adjectives to aptly describe the scale of devastation caused by the monsoon rains.

Two days ago, the United Nations Secretary-General Antonio Guterres said Pakistan is facing “a monsoon on steroids” and called the inundation of “epochal level.” He further urged the world to come to the country’s aid as he launched a $160 million appeal to help the tens of millions affected in the disaster. The world followed suit, except of course, Bollywood bigwigs. But that is a story for another day. Politicians, activists, artists and sportspersons from around the globe have been raising their voice to call for donations for Pakistan.

American supermodel Bella Hadid shared a video clip on her Instagram Stories on Thursday, urging followers to offer any information that she could use to help the people in Pakistan. Hadid shared a video of young schoolchildren being hurried along in order to save them from floodwater. “Finding real ways to help Pakistan. Message me if you have any information, please,” she wrote.

The very next day, she penned an informed post to educate people about the extent of the damage so as to encourage them to donate. “This doesn’t even seem real, but is a reality to so many. More than 1,000 people — a third of them children — have died during severe flooding across Pakistan. From June through August, torrential monsoon rains washed away entire villages and infrastructure across Pakistan’s four provinces, affecting at least 33 million people. 4 million acres of crops have been destroyed and 800,000 livestock have died,” she wrote on Friday.

She also listed how much people can spend and how their money will help those in need, “$2.50 can provide micronutrient sachets for a pregnant mother and young child. $12 can provide a hygiene kit with soap, sanitizer, detergent, buckets, menstrual supplies — enough for three months for a family. $55 can provide a carton of 55 ready-to-use-therapeutic food sachets that can treat a child suffering from severe acute malnutrition for six to eight weeks.”

Prior to this, Netflix’s Never Have I Ever’s Poorna Jagannathan had also acknowledged the tragedy following the torrential downpour. Taking to Instagram on Wednesday, the actor had written, “Will you join me in giving to Pakistan? What’s happening there is monumental- lives getting swept away. The death toll is way past 1000. Places to donate are below — including to Care Org which is doing great work on the ground.”

She tagged three other organisations for her followers to donate to — Hands Pakistan, Pakistan Red Crescent Society and Islamic Relief UK. Jagannathan a;sp shared a CNN brief about the flooding on her Instagram story, as well as TCF’s flood relief appeal. “TCF Pakistan works directly in Pakistan. You can donate here,” she told her followers.

Ms Marvel actor Mehwish Hayat, had posted a video to make an urgent appeal on her Instagram in collaboration with Penny Appeal, a Muslim charity organization providing aid to people in over 30 crisis-hit countries worldwide. “I’m sure that like me, you have been watching the horrific pictures and footage coming out of the devastation being caused by the floods here. This is the worst disaster that Pakistan has ever experienced. Over 33 million people have been displaced. Over one and a half thousand people, including women and children, have died, and millions are without shelter and this is only going to get worse,” Hayat highlighted.

“Penny Appeal is now on the ground in the thirteen most affected areas, providing food, drinking water, and urgent aid to thousands, but this is only scratching the surface. Much more is needed and will be needed for a very long time,” the London Nahi Jaunga actor added. “Let’s dig deep and do whatever we can to help the victims, not just today, but for as long as it takes to rebuild the countless lives that have been shattered,” she urged.

A flood relief initiative called The Indus Relief 2022, on the other hand, is auctioning experiences to raise money for the flood victims. Helmed by author Fatima Bhutto, her brother and filmmaker Zulfikar Ali Bhutto Jr and Menaal Munshey, the initiative is auctioning a private screening of Jemima Khan’s new film What’s Love Got to Do with It and an hour in the studio with British musician and producer Nitin Sawhney.

An original artwork by Misha Japanwala, Zulfikar, Abdullah Qureshi, Hiba Schahbaz, Naizah Khan and couture by Shahmir Sanni are also up for auction. VIP tickets for Goodwood Revival, a motorcar race, and a horse race will also go under the hammer.

While a chance to have author Elizabeth Day name a character after you in her next book can also be availed and so can signed and personalised books from Fatima herself. In a previously announced collaboration, the Indus Relief and The Writing Room are also hosting a writing masterclass with author Mohsin Hamid, the proceeds of which will be donated to flood relief efforts.

Turkish superstar Engin Altan Duzyatan stated on Instagram that he is praying for Pakistan, while Hollywood actor Alec Baldwin had fell short of words to express his thoughts on the devastation caused. Taking to Instagram on Wednesday, Baldwin had shared a viral video from northwest Pakistan where floods washed away several hotels and houses leaving thousands of people homeless. “This,” the actor captioned the video.

Racer and Formula 1 driver Lewis Hamilton had stated in his Stories: “My heart and mind are with the people in Pakistan who have been displaced and left in danger by the historic floods. This is a climate disaster and they need all of our help right now.” He then provided his followers with a link to Rescue.org so they could send donations to the country. “Rescue.org is providing food, medical support and other resources to those in need. Join me in donating here.”

Bollywood’s Ishaan Khatter and Aly Goni had also expressed sympathy towards the situation on the photo-sharing app. While Aly made a prayer on his Instagram Stories, Ishaan termed the situation “heartbreaking”.