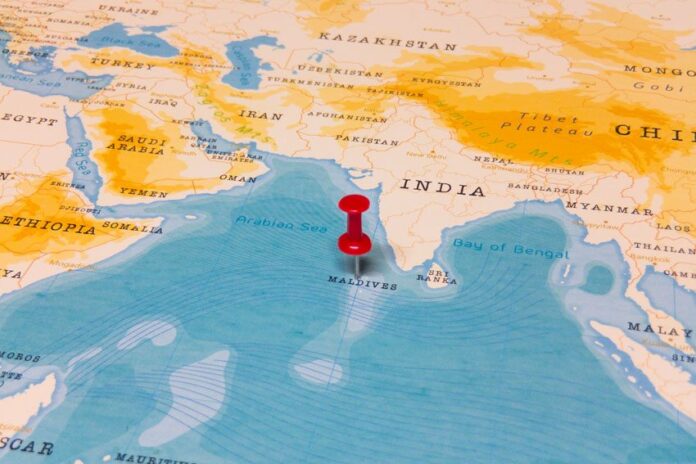 In its colonial history, Maldives first came in contact with the Portuguese who established an overseer of a trading post in the country and began controlling the spot from their main centre in Goa where they were fully established in trade and administration. However, the initial experience of the Portuguese was not pleasant as the people of Maldives reacted sharply against their move to impose Christianity in the area, and as a result of local revolt, after about 15 years, they were forced to leave the country.

The removal of Portuguese from the land was followed by the entry of Dutch who were then in a dominant position in Ceylon, but learning from the Portuguese, they established hegemony over the country without involving themselves directly in any local affairs and allowed the centuries-old Islamic customs and traditions to continue as usual.

The third and last strong coloniser, the British, entered the fray and ousted the Dutch from Ceylon in 1796 and included Maldives as a British Protectorate, which was officially recognised in 1887 as a result of the agreement between the sultan Muhammad MueenuddEen II and the British in which the former agreed to accept the British offer in the sphere of Maldivian external relations and defence but retained the home rule that was to be continued with Muslim customs and traditions, although in exchange of an annual tribute. Thus, under the British, Maldives got the status equal to Zanzibar and the Trucial States.

As a result of the agreement signed in 1887, the power of the Sultan continued to be on decline while the powers of the British governor-general increased gradually and it gave the British an opportunity to encourage constitutional monarchy in the country. Under British the first constitution of Maldives was proclaimed in 1932, which did not the favour either the Sultan or Chief Ministerial system and it created an angry mob in large number which finally managed to ruin the future of the new constitution.

However, there was a gradual turn of the tide and in 1953 the  Sultanate system of the country was suspended under the regime of Muhammad Amin Didi. In addition, in the period of Amin Didi in 1940s, in view of implementing large scale reforms in the country’s nationalised fish export industry, and it adopted reforms in education and promoted human rights. His reforms in various fields were not liked by the public at large and as a result, the beginning of the 1950s witnessed several upheavals and instability in the country with restoration of the earlier Sultanate and increased British power in the area.

Despite all efforts, gradually the British became unable to continue their colonial rule over Maldives and the native people also wanted to get independence. It resulted in the agreement of 26 July 1965, signed between the British and  Ibrahim Nasir,  on behalf of the Sultan, and it formally ended the British authority over defence and external affairs of the Maldives, but however, failed to change earlier Sultanate system which continued for three more years under Sir Muhammad Didi, who declared himself as a king after getting independence.

In a further step the country conducted a vote in the parliament on 15 November 1967 to decide whether the nation wanted to continue as a constitutional monarchy or become a republic. In the 44-member parliament 40 members went in favour of a republic and to confirm it at large, a national referendum was held on 15 March 1968, and of those who participated, 93.34 percent favoured establishment of the republic in the country

Finally, the historic moment came on 11 November 1968 when the country was declared a republic, ending the 853-year-old Sultanate, under the presidency of Ibrahim Nasir. It followed an instability in the country as the 1970s witnessed intense faction-fighting which compelled Nasir to flee to Singapore in 1978 with lots of government money.

The 30-year rule of Maumoon Abdul Gayoon began in 1978 and he remained in power despite three attempts of coup in 1980, 1983 and 1988 by Nasir supporters. In the context, the Government of India helped Maldives during the 1988 coup and in getting the situation back to normal.

About two decades ago Maldives faced a serious devastation due to the tsunami on 26 December 2004 following the Indian Ocean earthquake in which 57 islands were damaged, 14 had to be totally evacuated while six were destroyed. In this misfortune event the total damage was estimated at around more than $400 million, or some 62 percent of the GDP.

As it was the later part of Maumoon’s period, several independent political movements emerged in the country challenging the ruling Maldivian People’s Party (MPP), and a strong demand for democratic reforms was in the forefront under the leadership of dissident journalist and activist Mohamed  Nasheed, who around the time (2003), founded the Maldivian Democratic Party (MDP), to pressurize the ruling party to move forward in democratic directions speedily.

The new constitution of the country was approved and the first direct presidential election took place which gave victory to Nasheed. The new government formed in 2008 faced challenges on many counts including foreign debt, economic downturn, overprinting of local money, unemployment, drug use and corruption. Ultimately it led to anarchy in the country and Nasheed had to resign in 2012 due to the opposition of armed and police forces.

At the time, the vice-president in the government Mohammed Waheed Hassan, took over the charge as the country’s president. In line, once again Nasheed returned back after the elections held in late 2013. The elections results of 2018 went in favour of Ibrahim Mohamed Solih, who became president for a year and replaced in 2019 due to conviction on charges of terrorism and corruption. Thus, the overall system of administration and form of government in Maldives is under progress and likely to move forward in coming days and years.