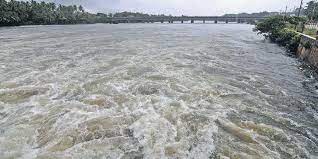 Federal Flood Commission (FFC) Chairman Ahmed Kamal on Tuesday played down the threat of “high flood” in River Ravi as India released 171,000 cusecs floodwater from Ujh Barrage the other day.

“On Tuesday evening, the water flow in River Ravi has been recorded at 63,000 cusecs which does not suggest any potential of high flood in the reservoir,” the chairman told APP in a telephonic conversation.

He said the high flood could be expected if the water flow crossed 100,000 cusecs.
“At the moment, there is no possible threat of high flood in River Ravi as the released water from India subsided after falling into main tributary,” he said.

The chairman said that Ravi and Sutlej rivers remained dry usually and some miscreants established encroachments at the banks of reservoirs. However, a low flood, a term which was used to describe water flow under 50,000 cusecs, could inundate those illegal establishments which might lead the media persons to report it as the high flood, he added.

Meanwhile, a report issued by the FFC said that low flood was reported in River Indus at Chashma-Taunsa, Taunsa Guddu, Guddu-Sukkur and Sukkur-Kotri, while there was a medium flood in River Chenab at Khanki Qadirabad and a low flood at Marala (upstream Khanki).

Isolated Heavy Falls is expected over Islamabad, Punjab (D.G. Khan, Rawalpindi, Sargodha and Gujranwala Divisions), Khyber Pakhtunkhwa (Peshawar, Kohat, Bannu and D.I. Khan Divisions), as well as Eastern and Coastal Balochistan including upper catchments of all the major rivers of Indus River System, besides isolated thunderstorm/rain over rest of the country.