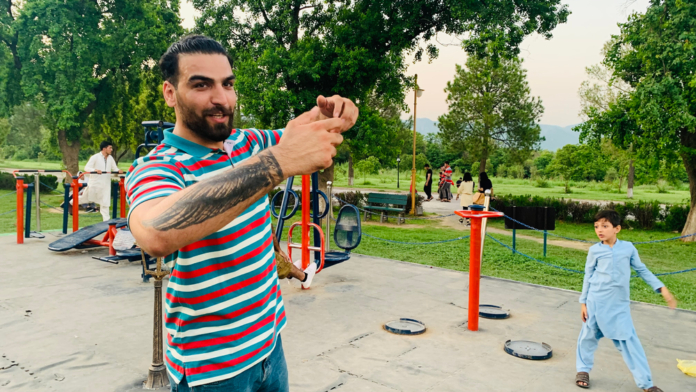 Afghan judo champion Tawab Alam, 28, left his home in northern Kunduz province on August 15, 2021 — the day the Taliban captured the country. He is now in Pakistan but cannot get a job and has run out of money.

This is Alam’s story as told to the Thomson Reuters Foundation.

I fled my country not only because my life was in danger, but also because my family was at risk due to my work.

At the time, I was a presenter and reporter with a local radio station. After the Taliban seized the country, they began detaining journalists.

They also detained the head of my radio station.

The journey to the border was one of the most difficult of my life. I barely slept for three nights.

The Taliban know who I am and what I look like because I was in my country’s national judo team and was the national champion three times.

To avoid attracting the Taliban’s attention, I changed my entire appearance and grew my beard. I was very frightened.

I had two reasons to fear the Taliban. Apart from being a journalist, I used to work as a security officer in a private security company in Kabul, but the Taliban in Kunduz thought that I was working as an agent for a foreign country.

I travelled to Pakistan with two friends and we witnessed many scenes of brutality. People we met on the journey told us the Taliban were raiding homes and taking people away. I’m sure I would have been killed if I hadn’t changed my appearance.

We had to pass through many Taliban checkpoints where they were searching vehicles and questioning and beating people.

I came to Pakistan to save my life and for a brighter future. But this has proved to be merely a dream. I’ve been jobless ever since I arrived.

I’ve applied for work at restaurants, a department store and a hotel. Some people said they couldn’t give me a job because I don’t have a work permit.

There have been other problems too. When I first arrived, a guesthouse refused to let me stay because I didn’t have a visa.

I’ve also been harassed by the police who tried to demand a bribe. This happens a lot to Afghans here. And once, a taxi driver chided me for leaving Afghanistan, saying I had no honour.

I live in a hostel in central Islamabad and pay Rs20,000 a month, including meals and laundry. But now I’ve used up all my savings. I have to walk everywhere because I have no money.

I’m now planning to move to the makeshift camps that Afghan refugees have set up in a park in the city. I have no other option.

I had a happy life in Afghanistan. My big loves were judo and kurash (a form of wrestling). My fans nicknamed me “uchimata”, a type of judo throw.

I have represented Afghanistan in many international tournaments in Kazakhstan, Uzbekistan, Iran and Turkey etc. In 2014, I won silver at the Judo South Asia Championship in Nepal.

I miss my sport — it was my life. I had to leave my judo uniform and my medals and trophies in Afghanistan. I can’t find anywhere to practise judo near where I live and can’t afford to travel.

After months without a job, I became depressed. I’ve nothing to do except watch movies, read books, play snooker and sleep.

A few weeks ago, I couldn’t even bear to have the light on in my room, but also whenever I switched it off it felt symbolic of the way my life had also been extinguished.

Then some friends encouraged me to start exercising. Every day I go to a gym in a park and do my exercises to help cope with the stress.

I don’t see any future in Pakistan now. What can we expect from Pakistan when it is already facing an economic meltdown, high inflation and political instability? I now want to move to a European country, the United States or Canada — that’s the only hope for me.

I’m appealing to these countries to help because the doors of Afghanistan have shut for me.