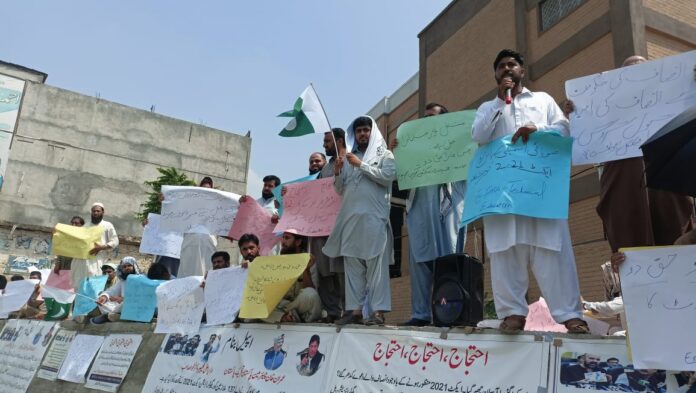 SWAT: The technical education officials of the merged tribal districts Monday staged a sit-in  in front of Chief Minister Mahmood Khan’s residence in favor of their demands here on Monday in Matta Tehsil of Swat District.
The employees holding banners and playing cards were demanding to be given civil servants category. Shafqat Ullah, Assistant Director of technical education in the merged FATA and other protesters, who participated in the protest, said that we were recruited by the FATA secretariat many years ago and after the merger, the Tehreek-e-Insaf government promised to regularize us and a regular act was also passed in December 2021, but So far we have not got the right of civil servants.
Mr. Shafqat said that our salaries have been stopped for 8 months and the employees of technical education from professors, assistant directors to class four have become victims of hunger.
He said that the Secretary Industry KP is not even meeting with us and is evasive. He said that now all the technical institutes are closed in the merged districts of FATA and the educational future of the children is getting dark but the government is not interested in it.
“Today we are protesting in front of the Chief Minister’s house in Matta Tehsil and if our demands are not accepted, we will be forced to go to CM house Peshawar and Bani Gala to protest there too,” the protesters threatened.
Tehsil Matta Chairman Abdullah Khan, The brother of Chief Minister Mahmood Khan, held talks with the protesters and gave them all kinds of assurances. However, the protesters maintain that their sit-in will continue until orders for their regularization are issued.
Facebook
Twitter
Linkedin
WhatsApp
Email
Previous articleKarachi security guard arrested for slapping, kicking woman outside apartment building
Next articleExcited Arshad says couldn’t sleep after record CWG performance

LAHORE: The Lahore High Court ordered the Punjab government on Friday to impose a smog emergency and call for a meeting to take precautions...
Read more
NATIONAL

KARACHI: The rise in dengue fever cases continued in Karachi as another 314 infections of mosquito-borne disease were reported during the past 24 hours...
Read more
NATIONAL

ISLAMABAD: The Sensitive Price Indicator (SPI) based weekly inflation for the week ended on October 6 for the combined consumption group witnessed an increase...
Read more
NATIONAL

ISLAMABAD: Pakistan was preparing to flag the need of a separate loss and damage funding stream required to be established at the Green Climate...
Read more
- Advertisment -

October 7, 2022
ISLAMABAD: The Sensitive Price Indicator (SPI) based weekly inflation for the week ended on October 6 for the combined consumption group witnessed an increase...