Let the people be the judge, not the political parties 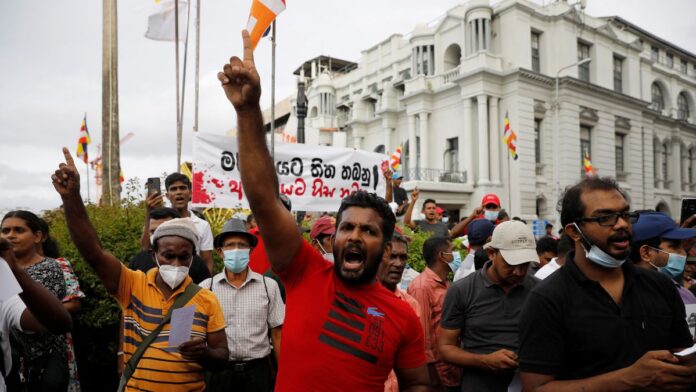 Amid the worsening economic crisis, the Sri Lankan government last week announced that the country has run out of fuel.

It forced the government to suspend the sale of fuel for two weeks. Rising inflation coupled with a shortage of essential and daily life items for example food, medicine, and now fuel has left the country with no option but to look for foreign aid and help.

There are numerous reasons for the decline in foreign exchange reserves. For example, Covid-19’s impact on the economy, especially on the tourism industry, steep tax cuts, and the mishandling and mismanagement of the economy.

Among the various reasons decoded by the experts which led to the crisis in Sri Lanka, the most important is the failure of the government in anticipating the crisis and the mismanagement of the economy. That is why crisis management is important.

The outbreak of a pandemic or a war is not in the hands of a country but what steps it takes to mitigate the impact of these disasters is in its hands and it is the prime responsibility of a state as well.

The political parties in Pakistan should not only try to assume power but also should offer crisis management plans. The government should work in its tenure and show the public what they have done. The opposition should act as a check but should not always try to overthrow the government and be in power

The decline in tourism, which was the third-largest source of foreign reserves in the country and contributed about 12 percent to its GDP, as a result of the pandemic and the soaring inflation as a result of the Russia-Ukraine war, could only be managed well as their outbreak was beyond the control of the Sri Lankan government. But, it could have been managed in a better way.

But, the sweeping tax cuts in 2019 by the new president, as a fulfillment of his pre-election promise, which some analysts describe as the reason for the current economic crisis could have been avoided and the matter could have been dealt with in a better way.

The current Sri Lankan economic crisis, which is also said to be a man-made crisis, could have been prevented had the new government taken steps in the right direction instead of making wrong decisions.

Crisis management is the formulation of plans and strategies to deal with unforeseen unfavourable events. The better the management of the crisis, the better the result.

The new government’s misstep to revamp the economic situation of the country backfired and Sri Lanka is on the verge of ending up as a failed state in a couple of years.

The Rajapaksa government did not have any concrete plan to tackle the economy but it came to power on a promise that proved to be detrimental to the economy.

It sheds light on the importance of a road map, a concrete plan, a party should have before coming to power.

In Pakistan, it is not new for the contesting parties to offer unrealistic solutions to the problems of the country. People select parties on their pre-election promises and they never see those promises fulfilled.

Pakistan has been and is facing several challenges and crises since its inception. Every party offers crisis management plans in their manifestos. And people elect parties on their election manifestos. But, once selected, those promises are never fulfilled and if implemented, they never give desired results.

People should re-elect the parties based on their performance and implementation of their crisis management plans.

Did the PDM government have a definite plan to get the country out of the economic crisis? Did it have the required skill set needed to solve the problems the country was facing?

Only time will tell how effective the steps taken by the PDM government are in fixing the economic problems of the country. But for now, it is the common man who is suffering and bearing the burden.

Governments come and go but Pakistan’s perennial economic problems stay. Every government comes with a miraculous plan to take the country out of the crisis. But, leaves behind a plethora of problems for the new government.

Take the current example of regime change in Pakistan. The PDM government was criticizing the previous government for soaring inflation not long before it took over the reins of the country. The PTI was not believed to win a considerable number of seats in the upcoming elections because of this.

But. things changed rather quickly. The PDM came to power in a not-so-common way of reaching the corridors of power. And the soaring inflation and rising fuel prices tested it badly.

What will happen as a result is something that should be looked at seriously. If the government is somehow able to complete its term, it will still go to the public with a claim that it could not accomplish its goals because it did not get an ample amount of time. The PTI government will also go to the public with an almost similar narrative that it also did not get enough time to see its initiatives bear fruit.

The political parties in Pakistan should not only try to assume power but also should offer crisis management plans. The government should work in its tenure and show the public what they have done. The opposition should act as a check but should not always try to overthrow the government and be in power.

Let the people be the judge, not the political parties.

February 5, 2023
MELBOURNE: Melbourne City head coach Rado Vidosic wants his players to continue taking responsibility and enjoying themselves on the pitch after the A-League leaders...