Military bases and the Abraham Accords

Is there going to be an economic tradeoff to recognize Israel 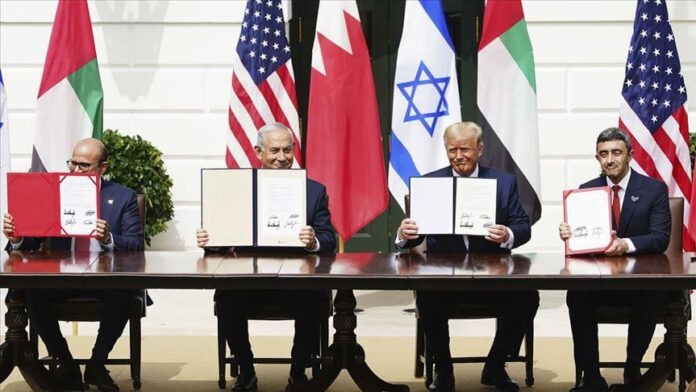 Nation states like Pakistan go by narratives; the elite builds them up for the average person. Established orders trying to float any idea usually go through the book. In recent times and in the past; journalists have been the soft projectiles for categorical intentions of the deep state. In 1987, the story of Pakistan being a nuclear state leaked in the face of the Brasstacks exercise conducted by the Indian Army was one such instance when an editor of a renowned daily became the willing fodder for the order of the day.

Today, we might have come across many social media debates about Pakistan being asked for military bases. We might have read a thousand times the narration of “absolutely not”. However the truth coming out of the mouth of a renowned journalist; this time; reflects upon the reality that something is in air. It is not propaganda fodder for either side of the political divide. Rather Pakistan is back to its role of front line state; the only credible economy of scale over which it has been able to erect its paradigms of growth and welfare for the few.

If the utterances of the seasoned journalist are taken at their face value; then Pakistan might see the turnaround in its economic woes, very much on the pattern of Paris Club adjustments during the War on Terror period, massive doses of foreign assistance during the Cold War days; or in the era of military alliances like SEATO and CENTO.

A casual look into the developing story might suggest similar scenarios seen in the 1960s, 1980s or the new millennium as discussed above. However, we might see a very different package of developments in the coming weeks, months and years.

Pakistan’s relation with the western powers has been formalized via Pentagon and for that matter, the armed forces have been found to be the best go-betweens. Though the SEATO and CENTO agreements were formalized during the dying days of successive Muslim League governments at the centre in 1955 were managed by the armed forces; specifically the PAF; taking part in periodic exercises like Mid Link in 1974; which even drew criticism from the Indian government on the floor of the Lok Sabha by the then Congress government led by Mrs Indira Gandhi.

Vulnerable economies; whether they are sanctioned or whether they are mismanaged; are at risk of trading off their decades-old stances for Paris Club-like relief or a Marshall Plan without any devastating war; obviously via IMF. For the wise men, the scenario is more than obvious. In an interconnected world, economies and nation states cannot remain disengaged for long. The pressure on compliance to the world order is enough for the weak to comply or surrender; as it suits them.

As things are developing now; those days of engagement usually did not go beyond a few harmless or benign exercises or strategy moots hosted by any of the member countries. These things happen even now. However, the Afghan war in 1979 and post 9/11 engagements have changed in content radically. The events in Afghanistan in 1979 prompted the USA to find a way to make the USSR bleed; as much as it sought a withdrawal from that country.

For that task Pakistan crossed the red line of a sleeping Cold War partner; doing small jobs like U-2 flights in the 1960s from Badaber AFB to actually making the USSR bleed in Afghanistan. That role was confirmed through many of the souvenirs’ (captured RUAF and AAF jets and military transports), which adorn the PAF Museum in Karachi.

Any military bases option exercised now might not be a benign engagement for Pakistan. In a way, the country would be offering its services openly for all the concerned stakeholders to take note and plan counter-measures for another day. With the Afghan campaign by the Coalition forces almost over; that country handed over to Taliban; the reasons for military bases might have prompted a heated debate in any properly democratic country for that matter. However, what is observed in the case of Pakistan is; not public approval for any such engagement; rather the tone of the established order, the government etc. seems to be like; “for information only” email.

Apparently, we are told that with the assortment of groups present in Afghanistan, migrating into the lawless country from other strife-torn places like; lately Syria; might be the cause for the USA to keep its presence in the region in one way or another. However, experiences in Iraq and Syria with reference to fighting these groups has proven that hand-to-hand combat has been a more successful strategy than air strikes only. Even Pakistani experience with these elements during the last one decade despite the air campaigns having stopped long ago; suggests that on ground combat is still the desired option.

Keeping these combat and strategic realities in mind; US insistence, if any, for the bases and approval of the same by senior opinion leaders (read journalists) might not be a single agenda item. Multiple objectives cannot be ruled out.

To get a clear picture; in terms of a logical thought process, it is imperative to see the developments taking place in the immediate neighborhood; the Middle East. The US president is scheduled to visit Saudi Arabia and the Gulf. International media has already started talking about the Joint Air Coordination between the Arab air arms and the IDF; Israeli Defence Forces. A meeting of the Gulf Cooperation Council on the issue is scheduled with Iraq and Jordan as “special invitees”.

On the back of it, a visit to Israel is again in the Pakistani news headlines. A person from Karachi is off and on quoted, and well-placed journalists do not mince words to say that it were the governments; the outgoing PTI or the other, who want to open channels.

The Democrats under Biden are promoting the Abraham Accords, floated by the Republican Administration under Trump. In other words; the talk of the town between the lines is to dismantle any resistance to the new world order; this time named the Abraham Accords.

Obviously, these initiatives do not have a military fallout only.  The greater goal is a unipolar world based on domination of the Abraham Accords. To put it more clearly; the spirit of capitalistic domination is to be transferred from the dying body of US domination to that of the Abraham Accords or acceptance of Israel at the international level. Naturally tied to these developments are the economic benefits linked to that.

Vulnerable economies; whether they are sanctioned or whether they are mismanaged; are at risk of trading off their decades-old stances for Paris Club-like relief or a Marshall Plan without any devastating war; obviously via IMF. For the wise men, the scenario is more than obvious. In an interconnected world, economies and nation states cannot remain disengaged for long. The pressure on compliance to the world order is enough for the weak to comply or surrender; as it suits them.

The coming months and even weeks can determine the true nature of engagement for the states of the region. Pakistan has few options at hand to steer its own way exclusively. It remains to be seen how the stakeholders for the best interests of the nation state settle the domestic economic crisis. However, international developments need a close watch on part of the think tanks. Time, for all practical purposes, determines where we stand in changing times.

Independence Day: A day of introspection

Pakistan came into being on 14 August 1947, despite incessant opposition by Indian National Congress and her allies. At its birth Pakistan was faced...
Read more
Comment

The Taiwan crisis will be a flashpoint between China and the USA. China considers Taiwan its territorial part, while the USA has long maintained...
Read more
Comment

Pakistan’s history is witness to the hard fact that whenever the political processes are animated; it is the civil society which suffers at the...
Read more
Editorials

PTI’s 13 August gathering was originally billed as an “impressive” show of power where Imran Khan would announce his party’s future strategy. With the...
Read more
Editorials

“If you don’t stick to your values when they’re being tested, they’re not values; they’re hobbies.” The kerfuffle over the revocation of the NOC...
Read more
Letters

Dadu used to be famous for its political and social activism. But, like rest of Sindh and the whole of Pakistan, this social and...
Read more

August 14, 2022
Pakistan’s history is witness to the hard fact that whenever the political processes are animated; it is the civil society which suffers at the...