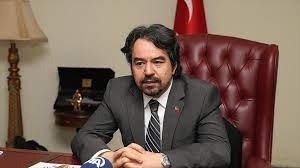 Director General Federal Investigation Agency Roy Tahir and other senior officials of Turkish embassy were also present in the meeting, said a statement issued here.
Pak-Turkey bilateral relations besides curtailing illegal immigration and human Trafficking to Turkey from Pakistan were came under discussion.

The Interior Minister apprised the Ambassador about his yesterday conversation with his Turkish counterpart Suleyman Soylu.

The minister thanked the ambassador and Turkish government for their excellent hospitality to Prime Minister Shahbaz Sharif and his delegation during the recent official visit to Turkey.

The ministers said that preventing illegal immigration and human trafficking was our common goal and Pakistan would provide full support in this regard. Administrative and technical modalities have already been finalized to stop illegal immigration, he added.

He said people involved in human trafficking earned bad name to the country adding that action against such elements was imperative.

Rana Sanaullah said Turkey was our best friend and brotherly Islamic country adding that had always helped Pakistan in hour of odd.

February 8, 2023
WASHINGTON: Beijing rejected a request for a secure call between Pentagon chief Lloyd Austin and his counterpart on the day an American warplane shot...