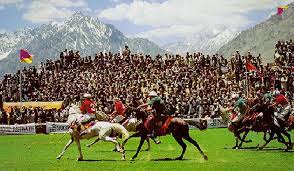 As the annual internationally famed event “Shandur Polo Festival” has been scheduled to be held next month, the dispute over ownership of the world’s highest polo ground has resurfaced between Gilgit-Baltistan (GB) and Khyber Pakhtunkhwa (KP).

Interestingly both chief ministers of GB and KP have sent invitations to each other as host of the event in an apparent attempt to show the true ownership of the playground which is situated in an area equally claimed by locals of Ghizer valley (in GB) and Chitral (in KP).

The Shandur Festival is scheduled to be held from July 1 to 03, 2022, in which polo teams from Chitral and GB are planned to participate.

The invitation letter sent by Chief Minister GB Muhammad Khalid Khurshid to his counterpart in KP Mehmood Khan has triggered a debate in KP especially in Chitral about the hosting the event. Through the invitation letter Khalid Khurshid said the Shandur Festival which has been celebrated regularly since 1980, has gained international fame and attracts hundreds of thousands of domestic and international tourists annually.

But, due to COVID-19, the said festival was discontinued for a few years. This year, with the consent and mutual coordination of both the Provincial governments the festival is being held from 01 to 03 July. Gilgit-Battistan being the origin of traditional free style polo promotes this game of kings and king of games through different interventions and initiatives. This version of the game played at Shandur has attained legendary status and is of great interest to the public of Gilgit and Chitral.

Presently organized in partnership jointly by the GB and KP, the three days Shandur Polo Festival has developed steadily in recent years into the massive celebration of mountain polo that it is today. “The Government of Gilgit-Baltistan extends a warm invitation to your good self to kindly grace the Polo Festival as Chief Guest on 1. July, 2022,” the letter said.

Earlier on June 14, similar invitation letter was also sent to chief minister GB by Mahmood Khan Chief Minister KP claiming that the world’s most interesting and attractive sports competition, freestyle mountain Polo game is played on the “Roof of the World’, about 12500 feet above sea level at the convergence, of the Hindukush, Pamir and Karakoram ranges.

He claimed that the beautiful valley of Chitral is the original birthplace of polo and the rugged mountain polo played there is arguably the polo in its purest form. Presently organized by the KP Culture and Tourism Authority, the three days Shandur Polo Festival has developed steadily in recent years into the massive celebration of mountain polo that it is today.

“The people and government of KP extend its warm invitation to your good self to kindly grace the Polo Festival as Chief Guest on 2” July, 2022,” the letter addressed to CM GB concludes.

After the two similar invitations of heads of the two provinces circulated in social media the debate about ownership of the area has been started which according to locals may culminate in any unwanted situation. Exchanges of harsh statements from the locals/elders on both sides of the Shandur area have started being circulated in social media, which, if not addressed wisely, may damage the beautiful event.

The Shandur area has remained disputed between GB and KP. In 2012, GB had called back
its polo team to lodge a protest against the KP’s control over the area and accused the provincial government of monopolizing the event. In later years the two governments had decided to jointly organize the event.