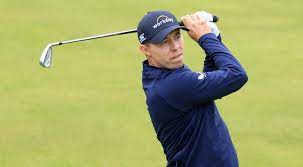 After a thrilling three-man fight down the back nine at The Country Club, Fitzpatrick fired a two-under-par 68 to finish on six-under-par 274 and defeat Americans Scottie Scheffler and Will Zalatoris by one stroke.

World number 18 Fitzpatrick, who won the 2013 US Amateur at The Country Club, matched Jack Nicklaus as the only US Open and US Amateur winners on the same course, the US legend doing the double at Pebble Beach.

The 27-year-old from Sheffield, who shared fifth last month at the PGA Championship for his best prior major result, sank a stunning 48-foot birdie putt at the 13th hole to grab a share of the lead.

At the 15th, Fitzpatrick blasted out of the right rough to just inside 19 feet and rolled in a tension-packed putt to reach 6-under and lead by two.

But after birdies by Scheffler at 17 and Zalatoris on 16, Fitzpatrick clung to a one-stroke lead at the 18th tee.

After the Englishman sent his tee shot into a left fairway bunker, he blasted a magnificent approach to 18 feet and two putted for par, leaving Zalatoris needing to sink a 14-foot birdie putt to force a playoff.

When Zalatoris missed, the title and a record $3.15 million top prize belonged to Fitzpatrick.