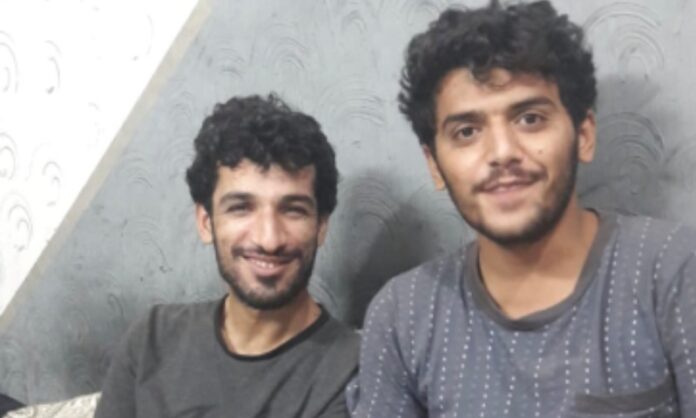 Doda Ellahi and Ghamshad Baloch — students of Karachi University’s Philosophy Department allegedly taken away from their house in the city on June 7 — have returned home, Nasarullah Baloch, chairman of non-profit organisation Voice of Balochistan Missing Persons said on Tuesday.

In a brief confirmation, the activist revealed that the students returned to their home near Maskan Chowrangi in Gulshan-i-Iqbal after 3am. “They both belong to the Kech district of Balochistan,” he added.

Earlier in the day, Shayhaq Ellahi and HudaHair Ellahi, siblings of Doda, had tweeted that their brother and his friend had been “safely released”. Shayhaq also posted photographs of the pair.

Both of them went on to thank God and all the people who stood with the family during the difficult time.

The development comes a day after relatives, activists and friends of the two students were forcefully dispersed by police, and 28 of them were briefly arrested from outside the main gate of the Sindh Assembly in Karachi.

They were there to protest against the pair’s “arrests”. The demonstrators had camped out outside the Karachi Press Club (KPC) for the last four days.

The police action was widely condemned, as footage emerged of police personnel dragging peaceful protesters and stuffing them in police vans.

Later on Tuesday, senior PPP leader and Climate Change Minister Sherry Rehman announced that an inquiry has been ordered into the “disproportionate and unseemly use of force against women protesters in Karachi outside the press club”.

She also posted a scan of a document which showed that the Sindh IGP had formed a committee comprising police officers Imran Yaqoob Minhas, Ahmed Nawaz and Dr Farrukh Raza to conduct the enquiry.

Yesterday, South-SSP Asad Raza revealed that the police detained 19 men and nine women as they tried to enter the assembly building. The officer denied that protesters were treated roughly. He added that woman police officers had detained female protesters.

The demonstrators were later released.

The protest organisers had accused the police of manhandling women and children. They said the Sindh police had broke their promise of arranging a meeting of the missing students’ relatives with Counter Terrorism Department officials on Monday. Therefore, they said, they again staged a sit-in near the Sindh Assembly building where the police manhandled and arrested protesters.

Earlier, around 120-130 relatives and members of different organisations, including activists Seemi Din Baloch, Abdul Wahab Baloch, Aamna Baloch, Naghma Sheikh and others, had marched from the KPC towards the assembly building where the budget session was ongoing. Passing through Sarwar Shaheed Road, they had staged a sit-in at the assembly’s gate.

August 14, 2022
ISLAMABAD: Minister for Information and Broadcasting Marriyum Aurangzeb Saturday said the journey of democracy would continue with same zeal and zest which had passed...