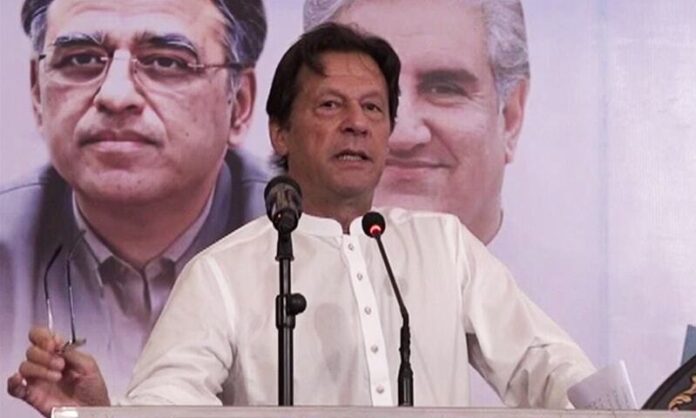 ISLAMABAD: PTI Chairman Imran Khan Monday warned against looming threat of food shortage in the country, saying Pakistan could face the threat of food insecurity if the concerns of farmers and the agriculture sector were not addressed and inputs are not provided to the farming community on subsidised prices.

Speaking at a farmers’ convention in Islamabad, he said: “There is a danger to all of us. If special attention is not paid to farmers’ conditions then Pakistan could face problems of food security in the future.”

The former prime minister said that food security was linked to the country’s security itself. He also said that the issue was not limited to Pakistan but a matter of global concern as the Russia-Ukraine war had impacted wheat supply and prices.

“People are afraid that there will be famines due to how wheat supply has been affected from that war.”

However, he said, Pakistan was “fortunate” since it had the natural resources, conditions and opportunities to become a country that could substantially increase its wealth on the basis of agriculture alone.

Highlighting the problems faced by farmers, he said the cost of their inputs was increasing due to recent fuel and power price increases.

The PTI chairman talked about his government’s performance in the agriculture sector and said its main focus was to help farmers, recalling that it was part of the PTI’s manifesto.

He said the country couldn’t develop until the government paid attention to agriculture, adding that Pakistan was reliant on the agricultural sector until the industrial sector was more strongly established.

Elaborating on his government’s measures, such as subsidies, to support farmers, Imran talked about the high yields for different crops during his tenure.

Turning his aim at the current government, he said its economic performance so far had increased inflation.

He alleged that the PML-N-led government’s purpose was not to serve the people but to take care of its leaders’ interests and to follow the commands of the United States.

Imran alleged that the various parties in the government wanted to close corruption cases against their members, weaken institutions like the National Accountability Bureau and the Federal Investigation Agency and rig the next general elections in collusion with the Election Commission of Pakistan.

“We know where the election commissioner goes every weekend. He takes orders from [Punjab Chief Minister] Hamza [Shehbaz] and [PML-N Vice President] Maryam [Nawaz] and delimitations are being done so that the PML-N wins.”

The PTI chairman called on the people to struggle against the government and participate in a movement for “real freedom”, adding that Pakistan couldn’t move forward while the incumbent government remained in power.