Mohammad Rizwan explains why he says ‘our Virat Kohli’ 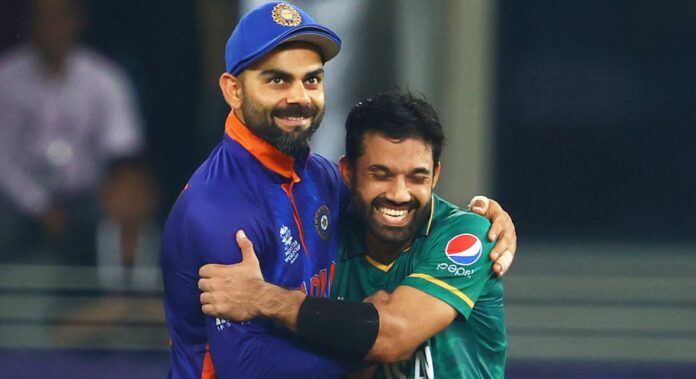 Pakistan’s wicket-keeper batsman Mohammad Rizwan has praised Virat Kohli for his humble attitude off the field as he opened up about his meeting with the Indian superstar after winning the ICC T20 World Cup match last year.

“It was the first time I was meeting Kohli. The kind of things I had heard about him, other players also told me ‘Virat is aggressive and all’. But the way he met me before and after the match, it was amazing,” said Rizwan in an interview on the Youtube channel Cricket Baaz.

Virat Kohli has become a global superstar and recently became the first cricketer in the history to reach 200 million followers on social media.

“We all belong to the cricket family. If I call him ‘our Virat Kohli’, it is correct in the sense,” Rizwan added.

Last year, the pictures of Mohammad Rizwan and Babar Azam went viral after all three players were seen engaging in a casual chit-chat after Pakistan secured the 10-wicket victory against India in the T20 World Cup.

“Obviously, when we enter the ground, no one is a star. There we have no brotherhood or anything of that sort. But outside the field, when we met Kohli, and some of our players also met MS Dhoni, we met with a lot of love and affection,” claimed Rizwan.

Rizwan further complimented Cheteshwar Pujara, with whom he played alongside in the County Championship.

“Even in County cricket, where Pujara is with me, believe me, we live with so much love. In fact, I am the one who keeps bugging him, calling him out. He keeps laughing,” he shared.

Mohammad Rizwan and Agha Salman made unbeaten half-centuries as Pakistan eased to a seven-wicket win over the Netherlands in the second one-day international in...
Read more
Sports

Faizan Shahid in U8, Shayan Afridi in U12, Shah Sawar in U16 clinched the winner trophies in the first Iftikhar Ahmad Junior KP Tennis...
Read more
Sports

HARARE: Opening batters - Shubman Gill and Shikhar Dhawan starred as India cruised to a 10-wicket victory over Zimbabwe on Thursday in the first...
Read more
Sports

LONDON: The Manchester United Supporters Trust (MUST) said on Thursday any new owner of the Premier League club must be willing to invest heavily...
Read more
Sports

Nadal not discouraged by losing on return, says will be ready for US Open

WASHINGTON: Rafael Nadal was not too downhearted by defeat at the Cincinnati Open on Wednesday after the Spaniard lost 7-6(9) 4-6 6-3 to Borna...
Read more
- Advertisment -