Pakistan can’t progress until Imran is in politics: Maryam 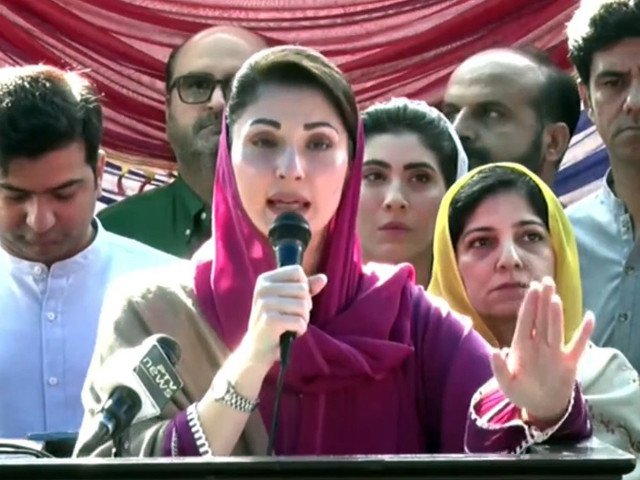 Talking at a party ceremony, she said that Pakistan cannot prosper until people like Imran Khan are active in the country’s politics.

The PML-N leader said that Imran Khan claims to plant one billion trees but the PTI workers burned trees and green belts during their long march.

She said that the PTI workers asked the government to unblock roads so that their revolution would come, adding that revolutions don’t need open roads, they make their own way.

The PTI leader sabotaged our relationship with friendly countries with his foolish policies, she added.

Maryam said that the PTI government destroyed the Pak-Turk projects initiated in the PML-N era.

She said that “Imran Khan is a gang leader […] his political campaign is more dangerous than terrorism.”

The PML-N leader said Khan has admitted in a recent interview that his party workers were armed, whereas, in her rallies, “not a single person carries weapons”.

Khyber Pakhtunkhwa’s people have understood the politics of Khan, which is why they were not part of his long march and his facial expressions were enough to show that the long march failed,” she added.

She went on to say that ahead of the long march, law enforcement agencies (LEAs) had found weapons at the residence of a PTI leader.

“If a person is openly accepting that they are involved in terrorist activities, then should we let them off the hook?”

Maryam said since Khan was removed from the prime minister’s office, he has set fires across the country. “These are only the goals of a terrorist.”

She asked national institutions if a “terrorist like him [Imran]” would continue to remain scot-free, one who is admitting to his ‘act of terrorism’.

She said her party would launch a new Radd-ul-Fasaad operation against him [Imran].

ISLAMABAD: Minister for Planning and Development Ahsan Iqbal, who heads the flood relief committee set up by the prime minister, has written to the...
Read more
NATIONAL