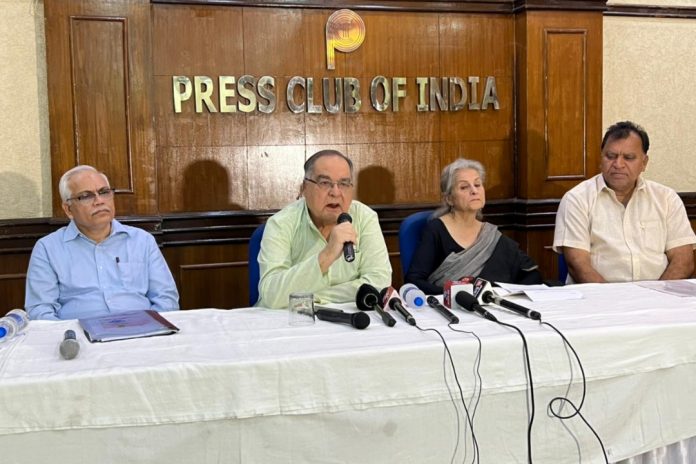 NEW DELHI: Within a week Indian capital will witness another all India level conference today (Sunday) to discuss the subjugation of Muslims and the fast deteriorating situation of the country since the fascistic Hindutva forces have acquired ascendancy.

According to Kashmir Media Service, the organizers of the meet have also announced that a collaborative platform called the Indian Muslim Intellectuals Council would be launched, which might be a precursor to the formation of a parallel Muslim Majlis-e-Mushawarat.

Briefing about the details of the convention billed as “‘the Indian Muslims Intellectual Meet’, former Member of Indian Parliament (MP) Mohammad Adeeb along with former member Planning Commission Syeda Syedain Hameed and others said the day-long congregation of over 300 Muslim intellectuals and eminent citizens will brainstorm on the pressing issues and lay out a roadmap to address these challenges.

He listed out the challenges before the community and the country.

“Attempts by a segment of the society to tear away the secular fabric of the country and the Constitution, the growing hatred against the Muslim community, rampant misuse of governmental institutions and a highly communized atmosphere amidst an alternative scenario where jobs have been lost, incomes has reduced and the country is facing challenges on several other fronts.”

These issues will be top on the mind of the intellectuals from the Muslim community when they collect on Sunday the 29th to discuss and ponder upon topic of ‘The condition of the country, challenges before the Constitution and our responsibilities’ at Aiwan-e-Ghalib Auditorium, Delhi, said the former MP.