Why is the Chenab River not as clean as the Vltava River? 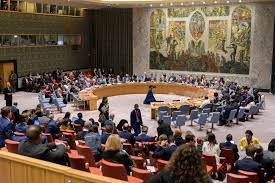 I follow international forums raising concerns about global warming, population growth, and its implications and I can cite several reports indicating Pakistan would soon face food security and drinking water issues, resulting in malnutrition in our coming generations, famines, and deaths.

On May 19, the UN Security Council held a very important session on “Conflict and food security” to review a sharp increase in global food insecurity that threatens to destabilize fragile societies and worsen armed conflicts and regional instability. This conference for me had two major interests; the vision Pakistan would show and tha this was the first visit of PPP Chairman Bilawal Bhutto Zardari as Foreign Minister to the USA in the backdrop of dragging the USA into Pakistan’s politics for domestic gains by the former government of PTI.

Attending online sessions of the conference was an opportunity to know the realities humanity is facing and to know ways to mitigate these impacts, including bolstering the global food supply. I remember in December 2021, the UN body (the Office for the coordination of Humanitarian Affairs) estimated that up to 811 million people are undernourished and 43 million people would fall into famine or famine-like conditions.

The annual publication of the Global Hunger Index (GHI), indicates that the chances of hunger in Pakistan before 2030 are categorized as “serious”. Ground realities for Pakistan are alarming and we have to not only secure our water sources, build new dams, and revamp irrigation networking but also control our population and I know population planning is a sensitive issue in Pakistan due to certain social norms.

We read loaded statements that future wars would be fought over water disputes but we waste five litres of water in the washbasin while shaving and 100 litres of water while taking bath under a western shower instead of using an old-style bucket. Are we really serious to survive in the next decade? I doubt so.

With the constant increase of population with a two percent annual growth rate, crossing the figure of 223 million, I doubt Pakistan can attain food security even if we do everything to avoid hunger. The population density in Pakistan is 287 per squarekkilometre with a median age of 22.8 years. Youth that has no open spaces and healthy activities and gets busy only  with their cellphones. Is it not a horrific picture of our future?

The other issue that interested me was the performance of our new foreign minister Bilawal Bhutto Zardari. His performance feels like a cool breeze, unlike our previous government his representation feels like somebody is representing Pakistan and representing us as a nation. The embarrassing monologue of me, I, my, mine, and the damage it inflicted to the Pakistani Foreign Office are more likely to be mitigated with the holistic approach Bilawal is taking.

During his entire visit, his conduct was of a mature diplomat who knows the aftermath of his personal conduct and discourse. He defended the Pakistan Foreign Office and its foreign policy, with no blame game, no conspiracy theories. Although the waters he decided to swim in are at high tide due to the unfavorable winds, he managed well.

As a young politician, cleaning the mess of predecessors is a risky and tiring exercise. He talks sense and he talks substance; he chose to change the trajectory to see our current political chaos and divert international attention toward issues such as global hunger crisis, climate, drought, and water. Instead of playing the victim and becoming part of the problem, he decided to become part of the solution.

It could have been much easier for him to blame the previous government and he could dwell on more talks about him and his utopian unachievable vision, but this self-obsessed narcissistic frame of reference has already cost us global isolation. He could have avoided the difficult questions related to the previous government’s half-baked policies, just by blaming them instead he behaved and acted like a leader who knows when to detach his ego from his higher goal and how a diplomat must represent his country and his nation.

I have written several times that not only PTI officials are totally unaware of diplomatic norms but also, they are least bothered about the consequences of their high-headed early morning tweets. They are unable to gauge the amount of embarrassment they orchestrate for us as a nation just to get domestic political mileage.

Pakistanis like me who study abroad with the commitment to soon go back to their motherland have different kinds of attractions for their country. They wish they will find a better, cleaner, and more operational country to live in. When our politicians behave well as Bilawal did, they feel proud of their country but some realities are painful as I mentioned above that my country would face disastrous environmental and social impacts of what we have done with our natural resources.

We have eaten up agricultural lands so as to develop horizontal cities, we have polluted our sweet rivers with filth and industrial acids and we are stabbing the chest of mother nature every passing day. Sitting at the bank of the Vltava River, I always curse why the Chenab River that goes through my city is not as clean, as beautiful, and as calm as the Vltava is. Chenab river was looking like a dead river when I was passing through this April while going back to the airport. It was barren, empty, and polluted.

My land, which is known as the Land of Five Rivers, is facing critical food security and one of the reasons is the lack of sweet water. India built several dams over rivers flowing into Pakistan but India never barred Pakistan from building dams. However, we did not build them due to reasons best known to those who had been decision-makers.

Sindh had serious reservations over building dams in the past and now the situation is horrific when 62 percent water shortage has been recorded at all three barrages of Sindh last week. Alas, we could have built dams in the 1980s over the Indus River but it is too late now.

We read loaded statements that future wars would be fought over water disputes but we waste five litres of water in the washbasin while shaving and 100 litres of  water while taking bath under a western shower instead of using an old-style bucket. Are we really serious to survive in the next decade? I doubt so.