Survival of a nation depends on its culture: Kashmir president 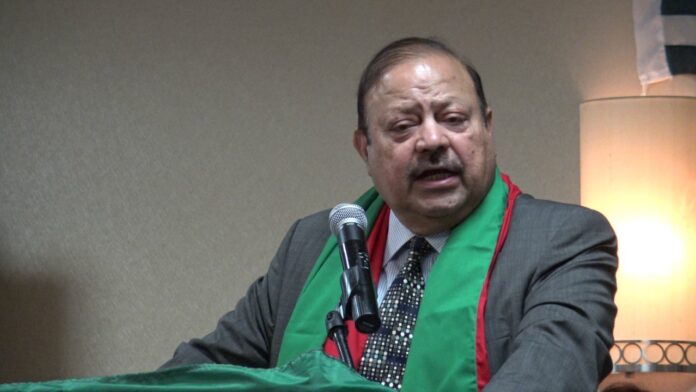 MUZAFFARABAD: Stressing the need for the promotion of cultural activities in the state, Azad Jammu and Kashmir President Sultan Mehmood Chaudhry said the culture play a crucial role in shaping a society.

The president was addressing an inaugural function of the annual Besakhi Mela in Khuiratta town of Kotli district late Saturday.

Speaking on the occasion, Chaudhary said steps were needed to be taken both at the government and private levels for the promotion of cultural activities like festivals.

Besides providing entertainment to people, events like Besakhi were pivotal for the promotion of indigenous culture, traditions and social values, he said. The president praised the organizers for arranging this wonderful event.

“A nation stays alive when its culture stays alive”, the president added.

Referring to the abysmal political and human rights situation on the other side of the Line of Control (LoC), Chaudhry said the government of Narendra Modi in India was engaged in conspiracies to take hold of the entire territory and grab it completely.

In this regard, he said, “India has issued fake domiciles to 4.2 million non-Kashmiris to change the proportion of the population in occupied Kashmir, while more than 4,000 local investors are being allotted land under the guise of investment.”

Similarly, the president said that redrawing of political map and constituencies in occupied Kashmir were part of the Modi government’s long-term plan to install a Hindu chief minister in the Muslim-majority state.

He said the people of the occupied Kashmir were not alone in their struggle. “The people of Azad Kashmir stand shoulder to shoulder with their brethren in Kashmir,” he maintained.

Earlier, the president was accorded a warm welcome on his arrival in Khoirata. On this occasion, Chaudhry inspected various stalls set up by various departments and civil society organisations.

The festival would feature javelin throwing, Kabaddi, horse dancing and other cultural programs.