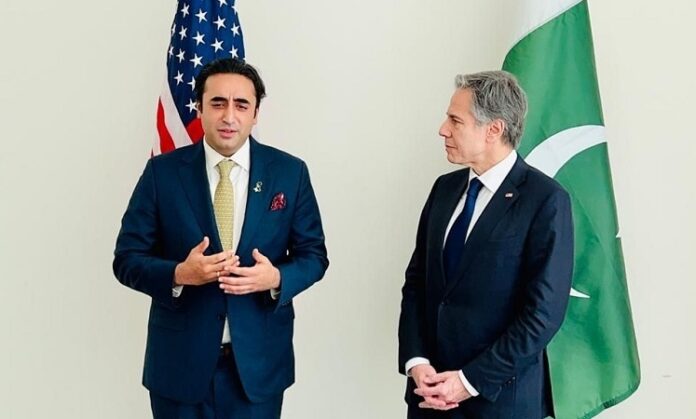 Foreign Minister Bilawal Bhutto Zardari on Wednesday held a meeting with US Secretary of State Antony Blinken in New York and discussed bilateral relations and global and regional issues.

Bilawal had arrived in the US on Tuesday to attend the two-day ministerial conference on the threat to global food security on the invitation of Blinken.

The meeting was “cordial and positive”, Bilawal told a journalist in a brief interview.

“We reaffirmed the importance of the 75th anniversary of Pak-US relations and mutual commitment to strengthening broad-based, comprehensive ties between the two countries,” Bilawal wrote in a tweet after the meeting.

He said he had in-depth discussions on issues impacting regional peace and security, including Afghanistan. “[We] resolved to work together to meet the challenges of food and energy security,” he said.

The two sides also discussed expansion of cooperation in trade and investment, energy and climate change, health and education, IT and tech, and agriculture as well as the importance of “trade over aid”, according to Bilawal.

He said the two countries will continue cooperation in defence and CT sectors.

According to the Foreign Office, Bilawal underscored the importance attached to multilateralism and the UN in Pakistan’s foreign policy.

He stated that Pakistan adhered firmly to the principles of the UN Charter and always supported solutions to global issues in accordance with those principles.

Bilawal particularly emphasised the need to advance the attainment of the first two Sustainable Development Goals (SDGs) aimed at ending poverty and hunger.

He underscored that Pakistan desired peace with all its neighbours, including India, which he said will continue to remain elusive unless the Kashmir dispute was resolved in accordance with the UN Security resolutions and the wishes of the Kashmiri people.

Bilawal also lauded the secretary general’s commitment to combat Islamophobia and also reaffirmed the resolve to work closely with him on the matter.

He appreciated the UNSG’s role in mobilising humanitarian and economic assistance for Afghan people. The foreign minister shared Pakistan’s concern about the spillover of instability in Afghanistan into Pakistan.

He emphasised that the international community’s response must address the urgent humanitarian needs and avoid a complete collapse of the economy in Afghanistan that will have dire consequences for ordinary Afghans.