The constitutional crisis in Punjab

The situation gets out of hand 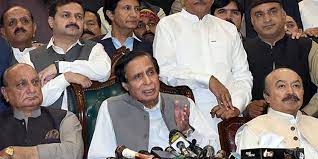 The Federal Cabinet Division notified that Punjab Governor Omar Sarfraz Cheema has ceased to hold office and asked the Speaker Provincial Assembly Punjab to act as acting governor of the province. In the fierce battle between the incumbent government and the former government, no attempt is being left to make mockery of the constitutional provisions. The federal government has committed contempt of the constitutional offices of both President and Governor with the illegal and unconstitutional removal of the Governor through a notification.

The Governor has practically the same relationship to administration of provincial affairs, as the President has to the administration of federal affairs. The Constitution of Pakistan underpins a system of federal parliamentary Democracy and the Governor of a province under the constitution enjoys an exalted position, as he is a nominee of the President and a symbol of the federation in the province. In a pluralistic society rent with political polarization, ethnic, racial, provincialism and other diversities, for strengthening the process of social harmony, democracy and other creative enthusiasm, the role of the president and the governor becomes all the more important. Both the president and the governor, apart from their other constitutional functions, are under an oath to preserve, protect and defend the Constitution which implies that their role is not mere restricted to the advice of the Prime Minister or the Chief Minister. They are also bound by their oath.

Though under Article 101 the governor of each province is appointed by the president on the advice of the prime minister, the governor holds his office at the pleasure of the president and not of the prime minister. Article 101(3) reads as “the Governor shall hold the office during the pleasure of the President and shall be entitled to such salary, allowances and privileges as the President may determine. Article 101(5) further states that the President may make such provision as he thinks fit for the discharge of the functions of a Governor in any contingency not provided for in this Part”. The bare reading of Article 101 suggests that neither the Prime Minister nor the Cabinet have got the constitutional prerogative to remove the Governor from his office.

Given the current situation of the country, it seems that this matter too will be taken to the courts for interpretation. The recent judgment of Lahore High Court Lahore has also contributed towards the current crisis in when it asked the Speaker National Assembly to administer the oath of office to Chief Minister to Hamza Shehbaz

He has simply rejected the summary with reasons therefore, it’s not a matter of reconsideration within the meaning of Article 48(1) of the Constitution. The automatic implementation of the Prime Minister’s advice takes effect after the period during which the President has to act on it has lapsed, but not in the case of removal of the Governor as the Governor holds office at the pleasure of the President.

Furthermore, sub-article (2) to Article 48 states that “Notwithstanding anything contained in clause (1), the President shall act in his discretion in respect of any matter in respect of which he is empowered by the Constitution to do so and the validity of anything done by the President in his discretion shall not be called in question on any ground whatsoever”. It is a universally recognized principle of law that when law requires something to be done in a particular manner or way, it must be done in that particular manner. Therefore, as long as the president does not remove the governor from office under Article 101(3) of the Constitution, the latter will continue in his office.

Given the current situation of the country, it seems that this matter too will be taken to the courts for interpretation. The recent judgment of Lahore High Court Lahore has also contributed towards the current crisis in when it asked the Speaker National Assembly to administer the oath of office to Chief Minister to Hamza Shehbaz.

His lordship Justice Jawad Hassan erred while construing the constitutional provision as no provision in the Constitution allows the Speaker National Assembly to administer the oath of office to the Chief Minister. Under Article 255 of the Constitution the oath is to be administered by a specified person and if it is impractical for the oath to be made before that person, it may be made before such other person as may be nominated by that person. The judiciary cannot perform the constitutional functions entrusted to the parliament and the executive.

Mian Rauf
The writer can be reached at [email protected]