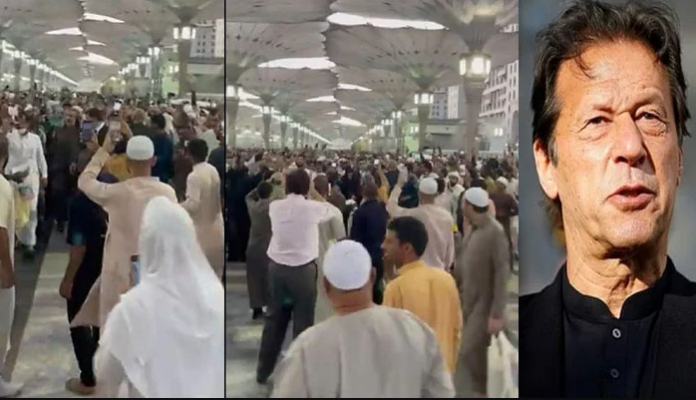 The significance of the booing of Prime Minister Shehbaz Sharif was not so much in the way that Pakistani politics  had reached Saudi Arabia, as the way the concept of a Haram was violated.  Haram is not just a sacred place, but a protected place. It is a sanctuary for criminals. Not only the state, but private individuals are forbidden from offering violence to those who have offended them. One example is the murderer of one’s father. You are not permitted to offer him violence, or take revenge from him. Of course, before the advent of Islam, that is exactly what you would do as soon as he stepped out of the haram.

Now Makkah had been a Haram before Islam, and one of the most radical things he (PBUH) did after the Migration was to announce that the Masjid-i-Nabvi was a Haram. So anyone who pursues anyone for any crime in the precincts of the Haram is negating that.

Another issue raised by the incident is the presence of the Holy Prophet (PBUH) there. Because all one’s good deeds can be negated by disturbing the Prophet (PBUH), one is supposed to be respectful there. One does not raise slogans. One doesn’t even tread too heavily.

Of course, Imran knows better than all of us how to behave in Madinah. And he knows exactly the kind of Riyasat-e-Madina he wants to build. He knows better how the Prophet (PBUH) treated the leader of the hypocrites, Abdullah bin Ubaayy. Ibn Ubayy was not chased with sloganeering people behind him, was he?

In fact, it’s a little surprising that no one from the PTI has said that Nawaz Sharif was behind the incident. Or maybe the USA. I’m sure the PTI is excited at the definite proof, if any is needed beyond the Kuptaan’s word, has emerged in the shape of Richard Olson’s conviction for receiving gifts from Qatar. Olson was US Ambassador to Pakistan about a decade ago. ‘Nuff said. Of course, Olson taking gifts was corruption.

Staying on foreign affairs, Sri Lanka is trying to get out of its crisis by a Golden Visa scheme, in which you can live and work there if you deposit $10,000 in a bank there. If Imran had remained PM, such a scheme would have worked really well. Especially as we would have targeted them at Russian oligarchs fleeing US sanctions. Remember those overseas Pakistanis who burnt their passports, some said they were unpatriotic, but that is the first thing you do abroad when you want to become illegal. And you become illegal because you intend to apply for an amnesty and get on the path to citizenship.

I see the PTI said that Buzdar had both resigned, and the new Governor rejected the resignation accepted by the previous one. I am told that Governor Umar Sarfraz Cheema has also rejected the resignations submitted by Mustafa Khar, Hanif Ramay and Manzoor Wattoo, which has created a problem of space at CM Secretariat, as the Secretariat has expanded, but it still has only one office for the Chief Minister. Not to forget that Ramay has departed this vale of tears.

I don’t know, but something seems to be moving women these days. Look at the girls from Karachi who are turning up in Punjab. Married to a local boy.The Due Zehra case seemed to capture a lot of imaginations, probably because both members of the couple seemed woefully underage. That also applied to the case of Nimra, who was found married to Najib Shahrukh in Taunsa, of all places. Well, that was a childhood engagement, but what about Dina, who had married Asad Abbas and was living in Vehari.

Well, at least they weren’t blowing themselves up, as was Shari Baloch, who blew up herself in Karachi, in a suicide bombing against the Confucius Centre in Karachi. She was a masters’ in Zoology,and an M Phil in education, married to a dentist, and the mother of two.

Footnote to these notes: Happy Eid to one and all. Remember, with a bit of skill, you can get

To the Village and stay there until Monday. By then you will be thoroughly sick of the Village, and remember why you fought and scrambled, and clawed your way to the Big Bad City in the first place.