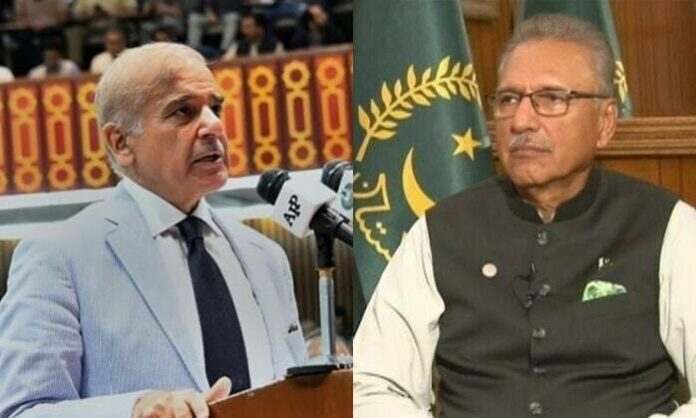 Prime Minister Shehbaz Sharif on Wednesday met President Dr Arif Alvi at the Aiwan-e-Sadr and discussed issues related to the political and economic situation in the country.

The meeting comes as the PTI and PML-N clash over the removal of Punjab Governor Omer Sarfaraz Cheema.

After the election of PML-N leader Hamza Shehbaz as new chief minister of Punjab, Cheema had said he would not administer oath to Hamza, claiming that the Punjab Assembly secretary’s report, the high court’s instructions and “the facts presented” to him had raised questions about the validity of the chief minister’s election.

Since then there was speculation that Cheema would be removed from his position by the federal government.

However, in a press conference on Sunday, the governor had claimed that the prime minister didn’t have the authority to remove the governor.

Subsequently, PML-N leader Marriyum Aurangzeb had said that the government is sending a summary to the president for his removal.

Following her statement, PTI’s Fawad Chaudhry had tweeted that the president had denied removing Cheema.

President Arif Alvi had distanced himself from the newly-elected government. He had skipped the oath-taking ceremony of PM Shehbaz on health grounds after which Senate Chairman Sadiq Sanjrani had taken over the responsibility.