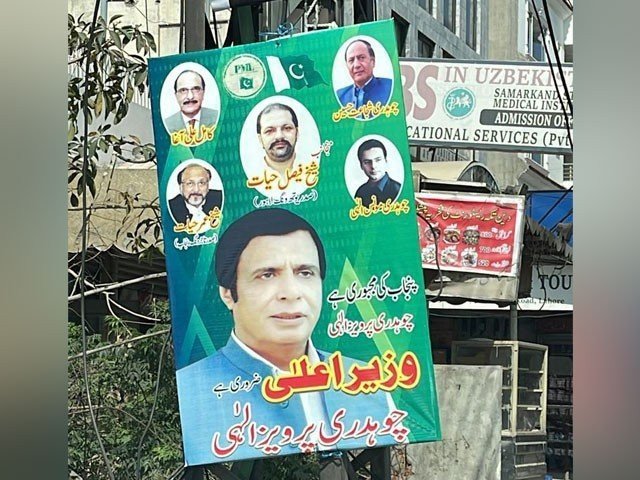 Pictures of posters and banners, showing PML-Q leader Chaudhry Pervaiz Elahi as a candidate for the Punjab chief minister’s slot, emerged on social media on Wednesday.

The posters have appeared as the government is trying to win over the coalition parties who have expressed their reservations over Punjab’s current chief executive Usman Buzdar.

The posters were first spotted outside PML-Q’s headquarters and can now be seen on Lahore’s major thoroughfares.

“Punjab is helpless, Chaudhry Pervaiz Elahi as chief minister is a necessity,” a poster reads.

PDM has support of more lawmakers than required:

A day ago, Elahi had said that the Pakistan Democratic Movement (PDM) has the support of more than required MNAs to pass the no-trust motion against Prime Minister Imran Khan.

During an interview with a private news channel, Elahi was asked to comment on former president Asif Ali Zardari’s claim that the opposition has more than 172 lawmakers’ support in the National Assembly. To this, Elahi had said: “He (Zardari) is right. They have the required number … even have more than what one can imagine. This is what we have assessed and seen.”

He had said the government is itself to blame for the position it is in, adding that it never learnt how to build relationships and instead “ruined things with everyone, including its own people”.