‘Khojaly genocide’ in Azerbaijan was crime against humanity: ministers 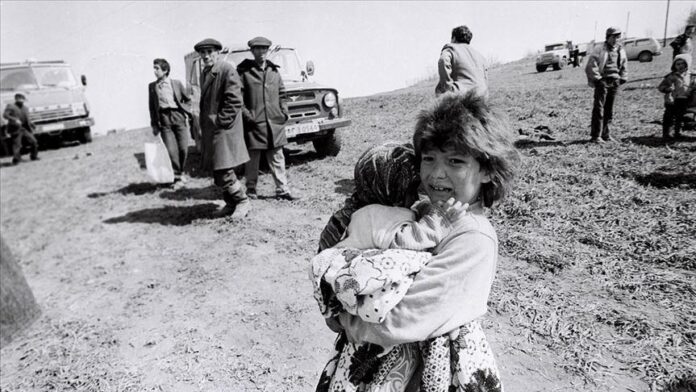 ISLAMABAD: Members of the federal cabinet called the “Khojaly genocide” in Azerbaijan in 1992 a historical crime against humanity.

Speaking at a seminar on the 30th anniversary of the genocide that was organised by MUSLIM Institute, a think tank, and the Azerbaijan embassy in Islamabad, Minister for Food Security and Research Syed Fakhar Imam and Minister for Economic Affairs Omar Ayub Khan said Pakistan always stood with Baku against the illegal actions of Armenia.

“Pakistan and Azerbaijan are two brotherly Islamic countries which are closely related to each other in the spirit of Islam,” Imam said in a statement issued by the MUSLIM Institute.

Khan said relations between the two countries are based on mutual trust and Pakistan has always given full moral and diplomatic support to Azerbaijan without any interest in the war caused by Armenia’s illegal occupation of Nagorno-Karabakh.

“Pakistan has always supported the principle stance of Azerbaijan on Nagorno-Karabakh, that’s why Pakistan has not recognised Armenia to date. This position of Pakistan is in fact in line with the ideas of Muhammad Ali Jinnah,” he said.

The speakers also urged the international community to take action against the perpetrators of a 1992 massacre carried out by Armenian forces in Khojaly, Nagorno-Karabakh that left more than 600 people dead.

On February 26, 1992, with the Soviet Union just dissolved, Armenian forces took control of the town of Khojaly in occupied Karabakh after battering it with heavy artillery and tanks, assisted by infantry.

The massacre is seen as one of the bloodiest atrocities by Armenian forces against Azerbaijani civilians in the Karabakh region, which was liberated by Azerbaijan forces in November 2020 after decades of occupation.

The two-hour Armenian offensive killed 613 Azerbaijani citizens, including 106 women, 63 children and 70 elderly and seriously injured 487 others, according to Azerbaijani figures.

Some 150 of 1,275 Azerbaijanis that the Armenians captured during the massacre remain missing.