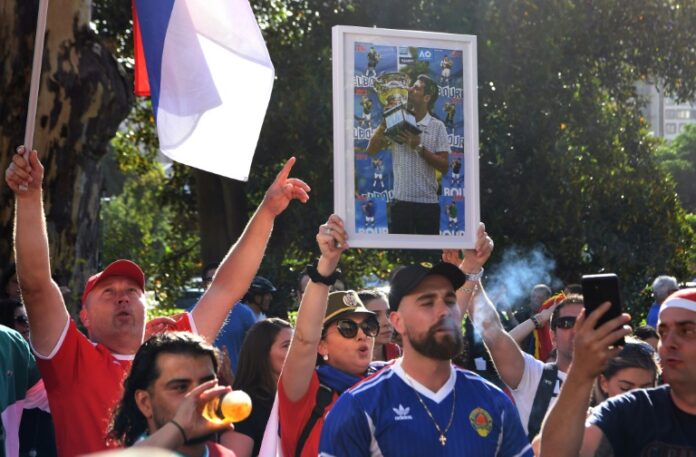 MELBOURNE: Australia was poised Thursday to decide if it will deport Novak Djokovic following a sensational legal battle over the tennis superstar’s arrival in the country without a Covid-19 vaccine.

The 34-year-old world number one’s hopes of a record 21st Grand Slam were in peril after he admitted breaking isolation rules in Serbia and to an incorrect statement in his Australian travel declaration.

As Djokovic was set to discover who he would play in the first round of the Australian Open, which opens Monday, the government was pondering tearing up his visa for a second time, after a first cancellation was dramatically overturned in court.

Immigration minister Alex Hawke is considering using his powers to annul the visa, his spokesman has said, although “lengthy further submissions” from Djokovic’s legal team have delayed a decision.

Hawke is likely to decide today, said a report in the Sydney Morning Herald, which did not cite a source and could not be confirmed.

Melbourne’s Herald Sun newspaper quoted an unnamed government source as saying that allowing Djokovic to stay in Australia without a Covid-19 vaccine would set a dangerous precedent.

The source was quoted as saying Prime Minister Scott Morrison’s government was expected to act despite any international “backlash” because cancelling the visa would be in line with Australia’s efforts to control the fast-spreading virus.

The government’s legal battle with Djokovic is politically charged in a country that has endured nearly two years of some of the toughest Covid-19 restrictions in the world, and in the run-up to May general elections.

‘Drift on and on’

“Australia has a policy of not allowing unvaccinated people into Australia. It is beyond my comprehension how we have got to this point,” Labor Party opposition leader Anthony Albanese said in an interview Thursday.

“How is it that Novak Djokovic was able to come here?”

As Covid-related hospitalisations rise in Melbourne, the Victorian state government said Thursday it would cap capacity at the Australian Open at 50 percent.

Spectators must be vaccinated or have a medical exemption.

Face masks will also be mandatory at the opening Grand Slam of the year except when eating or drinking, and those watching must socially distance while indoors.

Djokovic flew into Australia on January 5 claiming a vaccine exemption because of a positive PCR test result on December 16.

Border agents rejected his exemption, saying a recent infection was an insufficient reason, tore up his visa and placed him in a detention centre.

But the vaccine-sceptic Djokovic’s high-powered legal team overturned the visa decision in court on Monday on a procedural matter related to his airport interview.

On the day of his claimed positive test in Serbia, he appeared at a ceremony to honour him with stamps bearing his image. The following day he attended a youth tennis event. He appeared at both apparently without a mask.

Djokovic said he only received the PCR test result after attending the children’s tennis event on January 17.

But he admitted that he also went ahead with an interview with French sports daily L’Equipe on December 18.

“On reflection, this was an error of judgement and I accept that I should have rescheduled this commitment,” Djokovic said.

The journalist who carried out the L’Equipe interview, Franck Ramella, said Djokovic’s representatives had told him not to ask about Covid-19 vaccinations.

The reporter said he had been unaware at the time of the interview that Djokovic was Covid-positive.

The tennis ace also admitted to a mistake on his Australian travel declaration, in which a box was ticked indicating that he had not, or would not, travel in the 14 days before flying to Melbourne.

In fact, social media posts and reports show he flew from Serbia to Spain during that period.

Djokovic blamed his support team for this. “My agent sincerely apologises for the administrative mistake in ticking the incorrect box about my previous travel before coming to Australia,” he said.

But the minister may also act if he believes Djokovic may flout Australian public health orders, based on his failure to self-isolate in Serbia, he said.

Various options to appeal would be open for both Djokovic and the government, but at the end of the day, the immigration minister can exercise his personal power to cancel the visa, the lawyer said.