Pakistan’s trade deficit multiplied to $25.5b during first half of current fiscal year 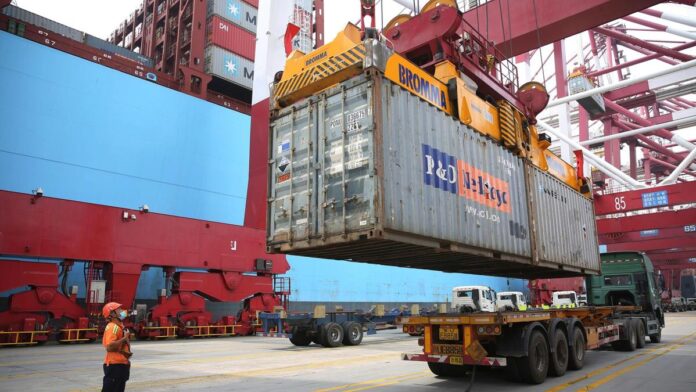 Pakistan’s trade deficit multiplied to $25.5 billion during Jul-Dec, as imports could not be brought under control despite administrative steps amid an attempt by the commerce adviser to downplay it through dodgy figures.

Imports during the first half increased two-thirds to nearly $40.6 billion. In absolute terms, the imports grew $16.1 billion, according to the Pakistan Bureau of Statistics (PBS)

The Pakistan Bureau of Statistics (PBS) on Wednesday released data which showed that the trade deficit widened to $25.5 billion in the first six months (July-December) of current fiscal year due to a significant surge in imports that outpaced the increase in exports.

The deficit was $13.2 billion (or 106%) higher than the comparative period of previous fiscal year, it added. The annual trade deficit target of $28.4 billion has become irrelevant due to higher imports.

The central bank has introduced a cash margin requirement (CMR) for more imported goods besides curtailing consumer financing to ease the import pressure. However, these measures have failed to contain imports that have risen to a new peak.

It is pertinent to note that the Finance Minister Shaukat Tarin has held numerous meetings to take steps to check imports but these too remained futile. The federal government has not yet implemented any new administrative measures to supplement the central bank efforts.

Tarin had assured Prime Minister Imran Khan that he would personally monitor the external sector. During the first half, exports increased one-fourth and stood at $15.1 billion as compared to $12.1 billion in the same period of previous year, according to the national data collecting agency.

The outcome of such monitoring was that “the pressure on import bill was mainly due to high global commodity prices, especially energy, steel and industrial raw material”.

During the first half, the exports were equal to 57% of the annual target of $26.3 billion. However, the Ministry of Commerce projects that exports will touch $31 billion in the full fiscal year.

In absolute terms, there was an increase of $3 billion in exports.

It is to note that imports remained out of control as they came in at $7.6 billion in December 2021. They were higher by 52% or $2.6 billion over a year ago, according to the PBS.

It was the second highest import figure that kept the monthly trade deficit close to the dangerous level of $5 billion.

However, just three days ago, Commerce Adviser Abdul Razak Dawood tweeted that “early indications are that the growth in imports has started to decrease. Imports during December 2021 decreased to $6.9 billion as compared to $7.9 billion in November 2021. This is a decrease of $1 billion”.

Dawood had also said that the import projection for December 2021 was $6.2 billion. PBS data showed that the commerce ministry’s projection went off the mark by a big margin of $1.4 billion in just one month.

The import figure that the adviser reported was understated by $700 million (or 10%), which raises doubts about efforts of the commerce ministry that is tasked to check the growing imports.

Usually these projections are made after the first half of a month following a review of the import trend.

The central bank’s foreign currency reserves are constantly on the decline and dipped further to $17.9 billion, as the impact of a $3 billion Saudi Arabian loan is being diluted.

Exporters are keeping their money outside of the country in the hope of further depreciation of the rupee that has lost 45% of value since the Pakistan Tehreek-e-Insaf (PTI) came to power.

Meanwhile, the exports also decreased 5.6% to $2.7 billion in December 2021 over November.